Russian and Azerbaijani experts, politicians and public figures, media representatives of the two countries were invited to participate in the event, which was timed to the 25th anniversary of the establishment of diplomatic relations between the Russian Federation and the Republic of Azerbaijan.

Trapeznikova said that the attention paid to thet event by the embassies, the Azerbaijani government and representatives of civil society testifies to its importance.

"On behalf of the Russian expert community, I will express a common opinion that it is possible to more effectively counter modern challenges through cooperation," Trapeznikova added.

Matanat Baghiyeva, representative of the Azerbaijani Presidential Administration, in turn said that the event not only contributes to the formation of good-neighborly relations between Russia and Azerbaijan, but also helps outline new ways of cooperation.

Assistant to the Russian Ambassador to Azerbaijan Oleg Murashev was also among those who attended the event.

He said that today the relations between Azerbaijan and Russia are actively developing in various spheres, including the economic sphere.

“A sincere dialogue between the leaders of Azerbaijan and Russia plays a huge role in strengthening relations between two countries,” Murashev said.

Addressing the event, Alasgarov said that the friendly and trusting relations have been established between Azerbaijan and Russia thanks to mutual understanding between the two leaders.

He added that the settlement of the Armenia-Azerbaijan Nagorno-Karabakh conflict will become the main guarantee of establishing stability in the region, which is in the interests of all countries.

Over the past 25 years, the level of cooperation between Azerbaijan and Russia has grown significantly, Igor Seleznev, Ph. D., senior research fellow of the Institute of Social and Political Studies at the Russian Academy of Sciences, said.

“Maintaining stability and security has become one of the important issues of cooperation between Moscow and Baku in the Caspian region,” Seleznev said. “Recently, Russian Defense Minister Sergey Shoygu said that he considers Azerbaijan to be an outpost of security in the Caspian Sea at a meeting with his Azerbaijani counterpart Zakir Hasanov.”

Seleznev also added that the status of the Caspian Sea is an important issue, and the Caspian littoral states haven’t been able to reach an agreement yet regarding its status.

It is encouraging that all sides are interested in maintaining stability in the Caspian Sea, he said.

Baku and Moscow are expanding cooperation in the Caspian Sea, including in the military and military-technical field, as well as in the sphere of fighting international terrorism, he added.

“Protection of the Caspian environment is another important area of ​​the interstate cooperation,” Seleznev said. “The Caspian Sea has a vulnerable ecosystem, and that includes energy projects implemented at sea, as well as.”

He added that preserving Caspian biodiversity is an important issue for the countries of the region.

Speaking at the event, political scientist, MP Rasim Musabayov said that Baku considers participation in integration projects initiated by Moscow, in the context of political and economic benefits.

"Baku considers its participation in all integration projects initiated by Moscow, in the context of its political and economic benefits, but observes it objectively not in all projects," he said.

It is necessary to recall today the joint risks of the two countries, especially in the field of security in the Caucasus and the Caspian, Musabayov said.

"The two countries are developing cooperation in the military-technical sphere, but Azerbaijan is developing its own independent defense industry," he added.

The expert also noted that good relations between Russia and Turkey is a plus for Azerbaijan, as Baku has close allied relations with Turkey and wants to have good-neighborly relations with Russia.

"Certain actions on the part of Azerbaijan also helped to remove the recent tension in the relations between Moscow and Ankara, we do not ask for anything from Moscow, we are ready to pay for everything. We can be the third partner in several formats, for example, with Turkey, while implementing any projects, as a bona fide partner, with financial responsibility," he said.

In turn, Trofimchuk Gregory, chairman of the Expert Council of Research Support Foundation “Workshop of Eurasian Ideas” said that I would like to see the past years become a strong foundation for the future Azerbaijani-Russian relations and a new start, but not a symbol of a fading post-Soviet friendship.

“Azerbaijan is important for us in all respects including economic, military-political, humanitarian and strategic, both from regional and international views,” he said.

Baku is more a global partner of Moscow than a regional one, from whom Moscow has much to learn, especially in the confessional area, where Moscow has some problems.

According to Trofimchuk, the coming years will not be easy, as today there is a threat of destabilization of the South Caucasus region and other complex regional situations, given the high concentration of unresolved problems in the post-Soviet area. 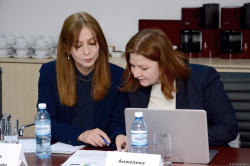