Azerbaijan has stressed its commitment to the protection of cultural heritage in its liberated territories, regardless of its ethnic, religious, or cultural origin, Azernews reports, citing the Foreign Ministry.

This was emphasized in the Azerbaijani government’s tenth to twelfth periodic reports under the Convention on the Elimination of All Forms of Racial Discrimination (CERD), presented in the recent session of the CERD Committee.

In conformity with the report, Azerbaijan has reiterated its commitment to fulfilling its duties under the CERD, “which promotes the same multicultural values that the country has long espoused” as a nation comprised of many multiple ethnic, cultural, and religious groups.

“Azerbaijan is committed to the protection of cultural heritage, on a non-discriminatory basis as set out in Azerbaijan’s laws and constitution, as well as following international standards in preserving cultural, religious, and historical heritage in the liberated territories, regardless of ethnic, religious or cultural origin. As Azerbaijan advised the Committee, Azerbaijan has implemented new security measures on access to heritage sites, regularly monitors the status and condition of the sites, and has issued instructions for construction crews on procedures to minimize the risk of damage to the sites during reconstruction activities. Azerbaijan was also pleased to see the Committee agree that a UNESCO technical mission was essential to provide independent oversight of its efforts to protect these sites. Azerbaijan has been publicly calling for such a mission earlier than 2005 and remains committed to facilitating the mission as soon as possible. It has welcomed similar missions from ICESCO, which praised its efforts to protect religious sites of multiple denominations in May 2022,” the report stresses.

According to the Committee's latest concluding observations on Azerbaijan's reports, Azerbaijan has taken positive efforts toward attaining CERD's aim of eradicating all kinds of racial discrimination. Azerbaijan, for example, has adopted a variety of legal and regulatory steps since 2017 to secure the equitable enjoyment of rights by refugees and stateless individuals, as well as children of all races, ethnicities, and origins.

Azerbaijan enacted the State Programme for the Development of the Azerbaijani Justice System in 2018, with the goal of improving the judicial system's efficiency and quality, especially through training and exchanges with partner nations. Azerbaijan also intends to enhance its domestic anti-discrimination framework by passing the proposed Law "On Prevention and Elimination of Racial Discrimination", which meets some of the Committee's recommendations.

“The CERD Committee also noted the steps Azerbaijan has taken to strengthen its existing laws against incitement of racial hatred, most notably through amendments to Article 283 of the Azerbaijani Criminal Code and to the Law “On Information, Informatization and Protection of Information”. The CERD Committee specifically acknowledged that these amendments impose stricter penalties on the incitement of ethnic, racial, social or religious hatred or enmity, and prohibit the distribution of such incitement and information promoting violence and religious extremism on the Internet and social media,” the report adds.

Azerbaijan has also made efforts to guarantee responsibility for violations of the CERD, including by launching criminal investigations into potential violations and prosecuting suspects when sufficient evidence exists. Furthermore, the country is committed to maintaining the essential principles guaranteed by the Convention and does not condone remarks or acts that promote hatred or incite violence against any national or ethnic group, it emphasizes.

Azerbaijan is dedicated to reconstructing the multi-ethnic and diversified communities that inhabited the region prior to the occupation while supporting the return of hundreds of thousands of IDPs to the liberated lands.

“This commitment comes from its highest levels, with H.E. President Aliyev’s most recent statement reiterating Azerbaijan’s continued openness to all citizens regardless of their ethnic, religious, or linguistic background of all heritages and religions in April this year [2022] when he reaffirmed that Azerbaijan ‘is a multiethnic country and all ethnic groups who live here live in peace and dignity, including Armenians.’ H. E. President Aliyev’s statement also confirmed that ‘the rights and security of the Armenians living in Karabakh… will be ensured by the state of Azerbaijan’,” the statement reminds.

Azerbaijan values productive discussion with the CERD Committee and takes notice of its opinions and suggestions. The country remains dedicated to upholding the rights and dignity of all people on its territory, regardless of race, color, descent, or national or ethnic origin, and will seek to achieve its ultimate aim of eliminating racial discrimination in all its forms and manifestations worldwide, it concludes.

Similarly, Hikmat Hajiyev, a presidential aide, stated that the Azerbaijani government is reconstructing the church in Shusha, which was damaged during the 44-day war with Armenia in 2020.

“Church in Shusha which has sustained collateral damage during the 44 days of the war is under restoration in its original architectural shape. Diplomatic corps attended the restoration works. Azerbaijan is proud of its exemplary culture of tolerance and multiculturalism,” Hajiyev tweeted. 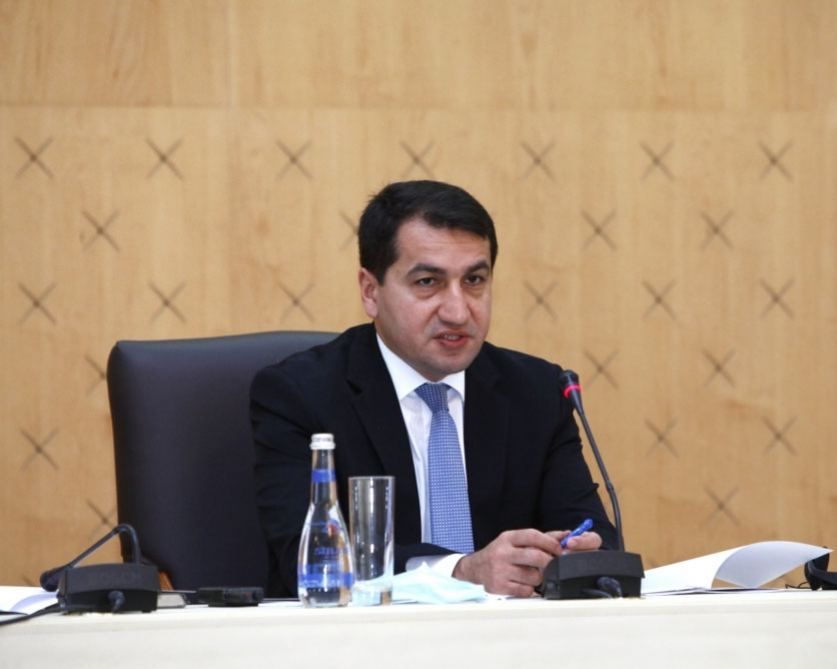