Servicemen, who were killed in a military helicopter crash in Khizi region on November 30, were buried in the second Alley of Martyrs in Baku.

Earlier, a farewell ceremony for the servicemen was held at the Sarhadchi Olympic Sports Center in Baku.

A helicopter of the Azerbaijani State Border Service departed from the Sangachal airfield to participate in exercise and crashed while landing at the Garaheybat training center, as a result of which 14 were killed and two wounded. The status of martyr will be assigned to the officers killed in the helicopter crash. 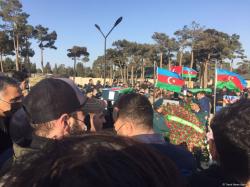