Azerbaijani rugs have been showcased at National Museum of China.

"The Splendor of Asia: An Exhibition of Asian Civilizations at National Museum of China" offers visitors an exciting journey to 49 countries.

The large-scale event marks the 70th anniversary of the People's Republic of China.

Among the works displayed in the pavilion - rugs, national clothes, jewelry and musical instruments - aroused greatest interest among the visitors, Trend Life reported.

The exhibition was first held in May - August 2019 at the Chinese National Museum in Beijing. Over two million guests visited the exhibition.

Taking into account the huge public interest in this event, the organizers decided to present it in other Chinese regions. The exhibition will run until January 5, 2020.

The Sumakh carpets have become widely spread and recognized over the last few centuries.  Since the 18th century, they have been made in country's Guba and Gusar regions.

Palas is one of the widely spread flat-weave carpets. The palas weaving process consists in passing the weft through the warp by a simple technique. The weavers decorate the palas by traditional patterns in the form of horizontal stripes commonly used throughout Azerbaijan.  As a rule, the palas is not framed by a border.

Today Azerbaijani carpets are saved and stored at the world museums and private collections. 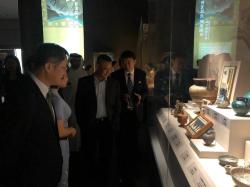