Azerbaijan’s state oil company SOCAR has signed an EPC (Engineering, Procurement and Construction) contract with Spanish engineering company Tecnicas Reunidas on December 19 for reconstruction of units at the Heydar Aliyev Baku Oil Refinery as part of its modernization, according to the company.

SOCAR-KBR LLC, a contractor for management of the modernization project, has selected the Spanish company Tecnicas Reunidas as a winner of a tender on an EPC contract for reconstruction of units and general production facilities.

“Today, SOCAR is implementing a number of major investment projects not only in the extractive but also processing industries, contributing to the diversification of its business portfolio and the country's economy. The reconstruction project of the Baku Oil Refinery occupies a special place. We are on the verge of producing gasoline and diesel fuel corresponding to ecological standard Euro-5,” Abdullayev said.

SOCAR announced the liquidation of the Azneftyag refinery and its merger with the Baku Oil Refinery named after Heydar Aliyev, in 2015. This decision was made in the framework of works to improve and optimize the structure of SOCAR.

The company plans to produce high-quality oil products as part of the next stage of the reconstruction work to be carried out at the Heydar Aliyev Baku Oil Refinery. Under the program, the oil refinery will produce Euro-5 standard diesel in 2019 and the Euro 5 standard petrol in 2020.

The cost of modernization of the refinery is estimated at about $1.5-1.7 billion.

By the construction of a new bitumen production facility, the current infrastructure of former Azerneftyag oil refinery will be fully decommissioned and the coastal areas will be emptied and handed over for the realization of White City project. Furthermore running costs of Heydar Aliyev Baku Oil Refinery will be optimized and the country will be provided with high-quality bitumen.

The modernization of the Heydar Aliyev Baku Oil Refinery will be completed by 2021. The production capacity of the refinery will be increased from 6 million to 7.5 million tons per year as a result.

The company reported that as a result of long discussions and consultations, specialists developed and agreed upon the main principles of prospective cooperation related to a Risk Service Contract (RSC) for the development of the Karabakh oil field, as well as a PSA (production sharing agreement) on various prospective structures.

President of SOCAR Rovnag Abdullayev and Senior Vice President of Statoil Al Cook signed two agreements on the main principles of cooperation. The first contract covers issues of exploration, development and main commercial principles and provisions of the PSA on some promising structures in the Azerbaijani sector of the Caspian Sea, while the second contract covers main commercial principles and provisions of the RSC regarding the Karabakh oil field.

At the signing ceremony, SOCAR president noted that specialists of both companies achieved positive results.

“Signing the agreement on the main principles will create a reliable basis for the implementation of future projects that will positively affect Azerbaijan’s economy,” he noted. “It is necessary to take measures to complete the work in this direction in a short time.”

SOCAR is wholly owned by the government of Azerbaijan. SOCAR participates in joint ventures (including ventures in Georgia and Turkey), consortia, and operating companies established with SOCAR’s participation. 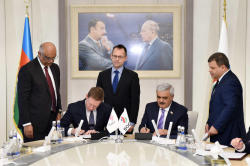