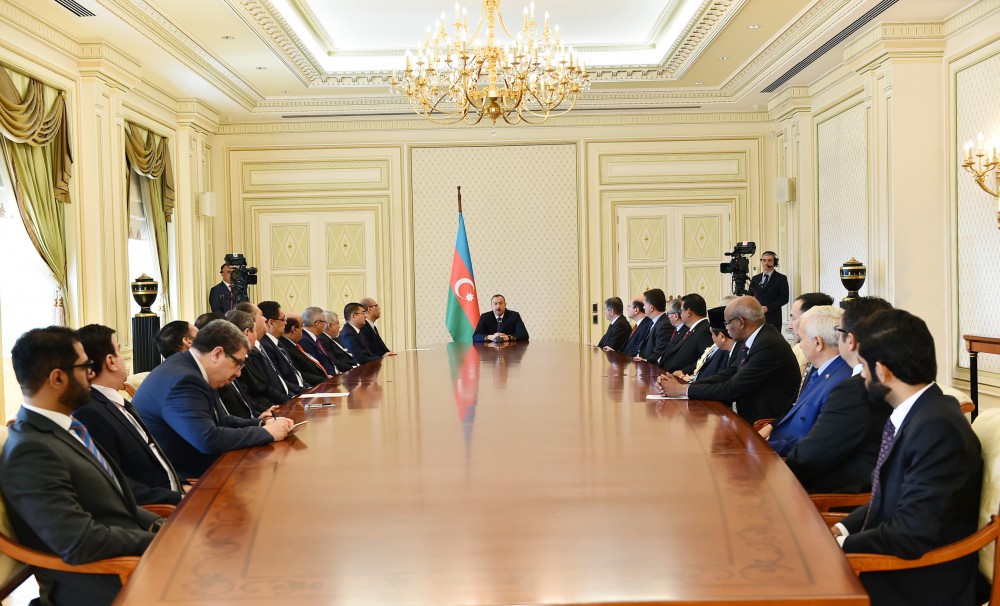 Cooperation with Muslim countries is one of the top priorities for Azerbaijan, said President Ilham Aliyev, voicing belief in further deepening of this cooperation in the years to come.

Recalling Azerbaijan's close ties with the Muslim countries, the president stressed that the countries successfully cooperate and always support each other in international organizations.

“Whenever issues related to Azerbaijan are discussed in the UN, we feel the support of Muslim countries. For our part, we always support Muslim countries in the United Nations,” the president.

President Aliyev further urged the entire Muslim world to demonstrate unity and solidarity in connection with the Armenian-Azerbaijani Nagorno-Karabakh conflict, as it does in all other matters.

The president, reminding the diplomats about the Armenian occupation of 20 percent of the Azerbaijani lands, ethnic cleansing against the Azerbaijani nation and more than a million refugees and IDPs suffering from this conflict, mentioned that the Armenians have destroyed all our historical and religious monuments on the occupied lands

“Most of our mosques have been destroyed, while the remaining dilapidated mosque buildings serve as military headquarters. Foreign journalists have recently reported on that and published photographs,” the president said, further explaining that the leadership of Armenia, while in European countries, constantly spreads distorted information about the conflict and tries to portray it in religious colors.

“The leadership of Armenia notes that the country has a complex geographical location, is surrounded by three Muslim countries and defends Christian values. This is a huge hypocrisy. As people living in Azerbaijan, you are well aware that Azerbaijan has never had any conflict or misunderstanding on religious or ethnic grounds,” President Aliyev said.

The head of the state emphasized that Azerbaijan, along with mosques, builds churches and synagogues, while the Armenian church remains intact in the center of the city.

“Therefore, such cheap and unworthy speeches of the Armenian president and others, I want to say again, are clearly a manifestation of hypocrisy. This shows once again that the Armenian leadership sees Muslim countries as enemies,” the president said, adding that Yerevan, to disguise its dirty intentions, is making attempts on the international scene to establish close relations with Muslim countries.

The president reiterated the importance of unity and solidarity in the entire Muslim world and further spoke about efforts and steps that Azerbaijan took to strengthen Muslim solidarity.

“Azerbaijan is waging a serious fight against Islamophobia which is lifting its head in different countries. At different levels, at the highest possible levels, we openly express our position on the matter, condemn Islamophobia and lead by example,” the president said.

Islamophobia is a threat both to Muslim countries and to those who condone this foul trend, according to President Aliyev, as it further exacerbates confrontation and increases mutual distrust.

“Representatives of all religions live in Azerbaijan in peace like one family. We live in brotherhood and friendship. We demonstrate that multicultural values live on and must live on. As you know, the current year has been declared a "Year of multiculturalism" in Azerbaijan. The results of the UN Global Alliance of Civilizations held in Azerbaijan this year show once again that Azerbaijan has made great strides in this direction,” he said.

The president also touched upon the host Islamic Solidarity Games scheduled for 2017 in Baku, saying that the Games will remain in history not only as a sporting event.

“We want the Islamic Solidarity Games to be held next year to demonstrate to the whole planet that Islamic world calls for unity, peace and stability. At the same time, I am sure that these Games will be a manifestation of Islamic culture,” he said, mentioning that a year after the Solidarity Games, the ancient Azerbaijani city of Nakhchivan will be declared the capital of Islamic culture.

President Aliyev stressed that Azerbaijan is committed to further strengthening the unity among Islamic countries and will continue efforts in this direction.

Expressing their gratitude to the Azerbaijani President, Moroccan Ambassador Hassan Hami, on behalf of the heads of diplomatic missions and international organizations of Muslim countries, extended his best wishes to the people of Azerbaijan on the occasion of the advent of the holy month of Ramadan and forthcoming Eid al-Fitr, and congratulations on the 25th anniversary of the restoration of Azerbaijan`s independence.

Highlighting Azerbaijan's achievements, the ambassador underlined that these accomplishments were highly praised in the Muslim world.

He reaffirmed the Organization of Islamic Cooperation member countries' support for Azerbaijan's territorial integrity and sovereignty, saying he wanted the Nagorno-Karabakh conflict to be solved through negotiations within the framework of Azerbaijan's territorial integrity and sovereignty in full compliance with the UN Security Council resolutions.

Funds issued for construction of highway in Goranboy