The discussions on the bill of the Republic of Azerbaijan "On Media" were held in Trend news agency.

Ismayilov expressed gratitude to the management of Trend news agency for the conditions created for the discussion of the bill.

Ismayilov stressed that the legislation in the field of media did not meet modern requirements and there were some gaps in the regulation of media.

“In this regard, it was necessary to develop a new law on the regulation of this sphere,” Ismayilov added.

The bill covers audio-visual, print-based and online media, news agencies and refers to journalists, media entities, editorial offices operating in Azerbaijan, their products, as well as media entities operating outside the country, but whose activity is aimed at the Azerbaijani audience, including the content of media products created abroad but distributed only in Azerbaijan.

The executive director of the agency informed about the provisions and concepts outlined in the bill, spoke about the goals and essence of the project.

“The purpose of discussing the bill with the participation of media entities is to finalize the bill, study and take into account the proposals and opinions on this issue in the final version of the bill,” Ismayilov added.

Ismayilov stressed that the agency he heads is open to the proposals on the bill and called on the media outlets to present their views on its improvement.

Then the head of the agency answered the questions raised during the discussions and the event continued in the format of discussions.

In conclusion, Ismayilov stressed the effectiveness of the discussions and added that the voiced opinions will benefit the common cause. 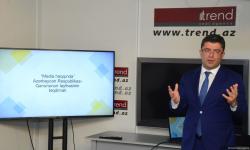