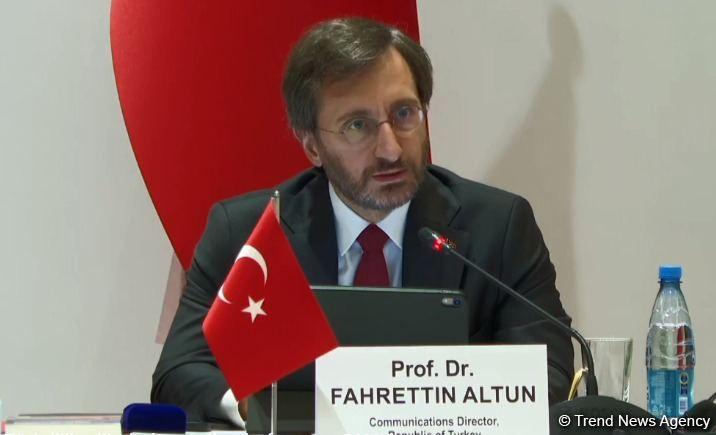 Turkey stood by Azerbaijan and did its best in the field of media coverage during the 44-day Patriotic war (from late Sept. through early Nov.2020), Head of the Turkish Presidential Administration’s Communications Department Fahrettin Altun said, Trend reports on April 10.

Altun made the statement speaking at the 3rd meeting of ministers and high-ranking officials responsible for information and media of the Turkic Council's member countries, held in Baku.

"We saw that all barriers can be dealth with by uniting. The media platform created between Turkey and Azerbaijan is an important example. We, the Turkic-speaking states, must expand, further strengthen the platform and fight threats together," added the official.

Altun also pointed out that one of the threats in the world today is digital fascism.

"It’s extremely important to fight it. We have begun to take the necessary steps to combat digital fascism. Turkic-speaking states must join forces on the media platform and jointly fight digital fascism," he concluded.

As a result of the Patriotic war, Azerbaijan liberated its territories from Armenian occupation.