Azerbaijan Automobile Federation (AAF) organized another parade and exhibition of classic cars in Baku on August 26.

Vice-president of Heydar Aliyev Foundation Leyla Aliyeva was among those who attended the event.

The vehicles included personal cars that were registered to participate in the parade as well as vehicles from exhibition of classic cars at the Heydar Aliyev Center.

Each of those cars has an interesting history. Over time, the historical value of these cars increases.

Spectator Dadash Agalarov, who came to the parade, expressed his satisfaction with this kind of events in Baku.

“I came to the parade with my younger son. Both my son and I really enjoy cars, in particular, retro cars. I participate in this interesting event for the first time. I really liked it, the exhibition is organized at a high level. I think that retro cars are interesting to everyone,” he said.

The spectator noted that those cars evoke nostalgic feelings in people. “The organization of such events is very important for the participation of car enthusiasts and for the exchange of views, the effective organization of leisure.”

Another participant Rauf Azizov said that he has been interested in retro cars for over 15 years and this interest has already turned into a hobby.

“I participate in the exhibition with the two cars I have assembled: these are Zaporozhets and Moskvich. Currently I am working on Volga Gas-21 car. Zaporozhets, presented at the exhibition, was produced in 1965, and Moskvich 427 is one of the favorite cars of cottagers,” he said.

Azizov added that organization of the retro car exhibition and parade plays a big role in moving young people away from bad habits and attracting them to a healthy lifestyle.

In turn, Vagif Guliyev, a participant of the parade, joined the event with a Zaporozhets manufactured in 1958.

“I always take an active part in the events organized by the Automobile Federation of Azerbaijan. During the exhibition and the parade of classic cars, owners of retro cars gather together, exchange views. I use my car only in such exhibitions and parades. Retro cars are my hobby,” Guliyev said.

The owner of a classic car, resident of Zagatala region Azer Imamov noted that for three years he was assembling SMZ S-3A car, manufactured in 1958 and left as a keepsake from his grandfather, with which he took part in the event. “The event is great and people come here with great interest to look at the cars,” he said.

In turn, the head of the Moskvich club Alirza Aliyev said that the parade and the exhibition have turned into a big feast.

“People are very interested in cars and their history. I think that this event is very interesting for both the older generation and the youth. Young people participate in this event with great interest. Our club has recently begun to function. In the future, we plan to take part in the exhibition with many cars,” Aliyev pointed out.

Not only the residents of Baku, but also tourists showed great interest in this event. The parade and the exhibition of classic cars left unforgettable impressions for a guest from Moscow Nikolai Timofeev. He expressed his satisfaction with the presence of numerous Soviet-made retro cars at the exhibition.

“We really liked the parade, as well as the cars on display here. We saw a warm attitude at this event, and, in general, in the city. Organized at a very high level, the exhibition gives a new lease of life to classic cars,” he said.

Local residents and foreign tourists were given an insight into the history of the automotive industry.

The event also featured a competition of classic costumes, which was also met with great enthusiasm by visitors. 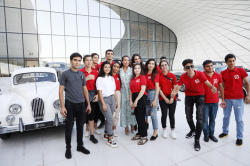 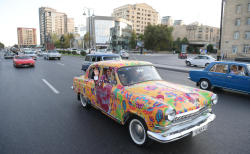 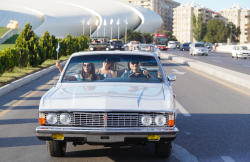