Azerbaijani citizen, resident of Ganja Ismayil Ismayilov, who was wanted in connection with suspicion of active participation in the Ganja events of Aug. 1, was detained while trying to cross the border through the Shikhli checkpoint into Georgia and was transferred to the Ministry of Internal Affairs, State Border Service said in a message on Aug. 6.

Only in 2018, 3,811 persons, wanted by law enforcement agencies, have been detained on the border of Azerbaijan and handed over to the relevant authorities.

Earlier, the Prosecutor General's Office of Azerbaijan reported that as a result of urgent investigative actions and searches carried out by the investigative group of the Prosecutor General's Office, the Ministry of Internal Affairs and the State Security Service on the Ganja events, 61 people have been charged, arrest was chosen as a preventive measure, special services have eliminated four people showing armed resistance, 13 people have been put into the wanted list.

As evidence, weapons, pistols, ammunition, grenades were seized during the operational measures in Ganja. 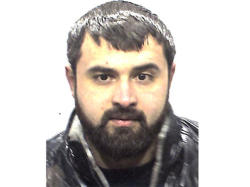