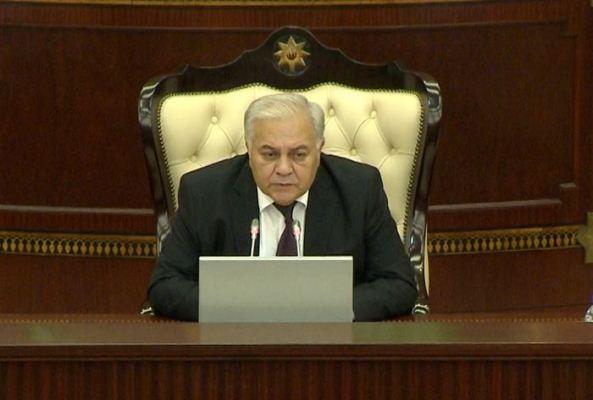 The hostile policy of Armenian chauvinists and their supportive forces against the Azerbaijani people has continued for about 200 years, Azerbaijani Parliamentary Speaker Ogtay Asadov said in Baku.

He made the remarks at a special session of the Parliament held on March 30 to mark the 100th anniversary of the 31 March – the Day of Genocide of Azerbaijanis.

Asadov said that the Tsarist Russia has moved about one million Armenians from Iran and the Ottoman Empire to the Azerbaijani territories purposefully to boost its stronghold in the Caucasus.

He reminded that over one million Armenians were relocated to Azerbaijan in the early 20th century. The speaker noted that during certain periods of the history the great powers skillfully used the Armenian factor to implement their geopolitical plans.

"The "Great Armenia" illusion of Armenian nationalists, using the secret and open patronage of these countries, has led to the fact that the South Caucasus population faced big fatalities. Armenian chauvinists have carried out genocide and terrorist acts in Eastern Anatolia and South Caucasus at different times with a view to carry out ethnic cleansing in the areas they wanted to seize. Two million people were killed as a result of their acts. The March 1918 genocide was the highest peak of these crimes. More than 12,000 civilians have been killed only in Baku during three days of March. The hostility policy towards our people continued during the Soviet period. One of the main reasons we have been subjected to genocides throughout the history is that we have not been able to act as an organized force before the enemy," Asadov said.

The speaker further noted that the Azerbaijani state is getting stronger and stronger day by day.

"All these are the best guarantees that no new genocide will be committed against our people. I am sure that Azerbaijan will liberate the occupied territories. A decent response will be given to those, who pursue hostility towards our people. President Ilham Aliyev has repeatedly said that Zangezur, Irevan and other territories are the ancient lands of Azerbaijan. The modern Armenia was created on the territory of Western Azerbaijan. This is a historical fact. I am sure that the history will give everyone the value they deserve. And sooner or later the justice will win," he concluded.