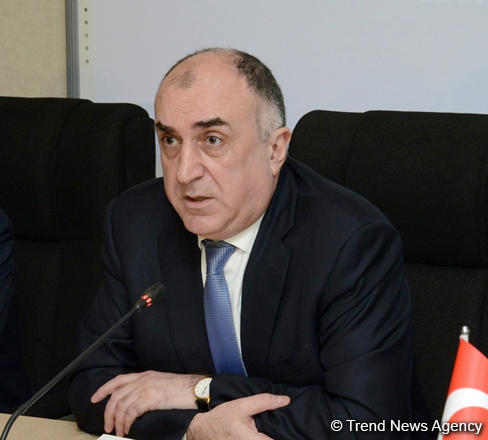 Azerbaijan and Armenia need to take a serious political approach to the solution in order to sit down and complete the process, Azerbaijani Foreign Minister Elmar Mammadyarov said in Brussels on May 15.

Mammadyarov made the remarks while answering questions from Armenian journalists during the Eastern Partnership Summit.

Replying to the Armenian journalist’s statement that without joining the illegal regime created in the occupied territories of Azerbaijan to the negotiation process it is impossible to achieve a real settlement of the conflict, Mammadyarov replied that it is not quite right.

"Over the years, while we were negotiating, the co-chairs visited the region, traveled to Karabakh and communicated with Armenian community representatives of Nagorno Karabakh," he noted.

FM expressed hope that the co-chairs inform the Armenian community representatives of Karabakh about everything that is happening in the negotiations both under the former and the current administration.

"The question is not whether they are participating or not. The question is that we need to take a serious political approach to the decision in order to sit down and complete the process," he stressed.

Mammadyarov added that this is what he deems "substantive negotiations."

Answering the Armenian journalist's counter question about what the Azerbaijani people have received over the years, he listed the opening of roads, the construction of a gas pipeline and an oil pipeline. "Is that not enough?" Mammadyarov asked.

"You have closed borders with at least two out of four countries, and the third one is about to get closed. And? Think and ask yourself," the Azerbaijani FM concluded.