After a year and a half break, the State Academic National Drama Theater has opened its doors.

Public and cultural figures, including the Culture Minister Anar Karimov attended the event.

In his speech, Anar Karimov touched upon the theater art in society and the history of the country. He praised the attention of the state to representatives of culture,  including actors, directors, etc.

The Culture Minister also highlighted the ongoing reforms and congratulated the theater team on the new season.

The theater's new season opened with the play "Karabakhname" based on Ilyas Afandiyev's work "The Ruler and His Daughter".

"Karabakhname"  tells about Ibrahim Khalil Khan, a ruler of the Karabakh Khanate, who  wanted to tried to establish political and friendly relations with Russia and Iran, but falls victim to the treachery and betrayal of the Armenians.

It also tells about the love story of the Khalil Khan's daughter Aghabeyim Agha and the vizier Sadai bekh. 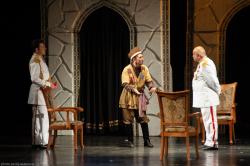