An exhibition "Echo of Soviet Azerbaijan. Carpet. Embroidery. Poster" has solemnly opened at the State Museum of Oriental Art in Moscow.

At the opening ceremony, director of the Azerbaijan National Carpet Museum Shirin Melikova said that the event marks ten years since  the inclusion of  Azerbaijani carpet weaving in UNESCO Representative List of the Intangible Cultural Heritage. She informed the guests that the exhibition presents unique carpets produced by Azerkhalcha” OJSC in 20- 70s of the last century.

Shirin Melikova noted that in Soviet times, many types of folk arts and crafts were forgotten expect Azerbaijani carpet weaving art. National carpets were exported to many countries of the world. Most of them were made according to the sketches of famous artists such as Latif Karimov, Mikayil Abdullayev, Gazanfar Khaligov, Ismayil Akhundov, Kazim Kazimzade, Salam Salamzade. Their works are still kept in museums around the world. This tradition is now successfully continued.

In his speech, director of the State Museum of Oriental Art Alexander Sedov emphasized that propaganda of a new ideology in Azerbaijan in the last century through traditional art would also be interesting to people in Moscow.

The  museum's collection features many exhibits associated with Azerbaijan of the last century. The exhibition "Echo of Soviet Azerbaijan. Carpet. Embroidery. Poster" displays some of them: embroidery, porcelain and other products. The event is planned to be held in Azerbaijan and other countries. 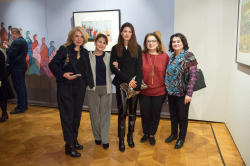