The 43rd session of the UNESCO World Heritage Committee continues its work in Baku.

The exhibition "Natural and Cultural Heritage of Kyrgyzstan" has solemnly opened at Baku Convention Center as part of the session, Trend reported.

In his remarks, Niyazaliyev spoke about the relations between Azerbaijan and Kyrgyzstan.

"Successful cooperation in various spheres has been developed between the two brotherly countries,” he said. “We are grateful to Azerbaijan for organizing the 43rd session of the UNESCO World Heritage Committee at a high level."

Sevda Mammadaliyeva stressed that that the sessions of the World Heritage Committee provide space not only for meetings and discussions, but also for exhibitions dedicated to historical, material and cultural heritage. Thus, the opening of the exhibition dedicated to Kyrgyzstan is of great importance.

"Azerbaijan and Kyrgyzstan are successfully developing friendly and fraternal ties that have been formed on the basis of the historical relations of two fraternal Turkic peoples. The exhibition allows visitors to become better acquainted with the culture of Kyrgyzstan," she said.

Further, the guests viewed with the exhibition. 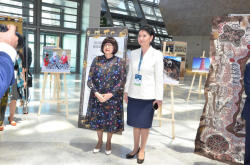