The Central Bank of Azerbaijan (CBA) intends to implement a new program for the transition to non-cash payments.

First Deputy of the Central Bank Alim Guliyev made the remarks at the conference “New trends in financial technologies: blockchain, cryptocurrencies and security” on May 17 in Baku.

Guliyev said, the program is currently under consideration by the government, adding that in 2017, the CBA together with international organizations launched implementation of the ‘Non-cash Azerbaijan” project.

“A special state program was drafted within the framework of the project. The program stipulates integrated measures for institutional development, strengthening of financial intermediation, formation of a digital ecosystem, application of innovative payment systems and increased financial inclusion,” Guliyev said.

Speaking at the event Ibrahim Alishov, Chief Executive Officer of the Financial Market Supervisory Authority, said that the digitalization of the banking sector in Azerbaijan is inevitable.

He noted that, this goal is one of the priorities in the Strategic Roadmap for the Development of the Financial Market.

“The digitalization of the country’s banking market is one of the main goals set out in the Strategic Roadmap. Unfortunately, the level of digitalization of Azerbaijani banks currently isn’t very high. Therefore, we need to conduct a deep analysis of the tools and technologies used in the banking sectors of other countries, and start using such technologies in the banking sector of Azerbaijan,” Alishov said.

“If we consider the current realities of Azerbaijan, it should be noted that the payment service providers are reacting to changes in the field of information technology most rapidly. In order to regulate their activities, the Chamber together with international organizations is preparing a draft law “On payment services and systems”. The preparation of the project is at a crucial stage. The application of this law will increase the number of payment service providers,” Alishov said.

He went on to say that the use of cryptocurrencies creates certain risks to Azerbaijan’s security, and the formation of the law on cryptocurrencies will make it possible to avoid these risks.

In turn, of the Azerbaijan Banks Association Zakir Nuriyev stated that over the past five years, 300 million manats ($176.47 million) have been spent on the development of information technologies in the banking sector of Azerbaijan.

“As many as 49.8 percent of the disbursed money have been spent on the purchase of new software, 16 percent - on the development of connection and communications, 15.3 percent - on servers and networks and 16.4 percent – on the preservation of software,” Nuriyev said.

“Cryptocurrencies don’t belong to any state and don’t have control mechanisms,” Nuriyev noted. “They are convenient for users, but they are a problem for a state. However, this market is growing, and appears in Azerbaijan as well. Therefore, it is necessary to find mechanisms for regulation of the cryptocurrencies market.”

Speaking at the event Shamil Arabov, Deputy Director General of the Department of Tax Policy and Strategic Studies of the Ministry of Taxes of Azerbaijan emphasized that profit from operations with cryptocurrencies in Azerbaijan should be put under taxation.

He noted that, operations with cryptocurrencies take place mainly between individuals, so they relate to non-entrepreneurial activities.

“The Ministry of Taxes believes that persons engaged in operations with cryptocurrencies should register with the tax authorities, provide the tax authorities with appropriate declarations and pay taxes to the state budget,” said Arabov.

He stressed that today the issue of taxation of operations with cryptocurrencies is widely discussed around the world.

“Almost the whole world today is discussing the possibility of attracting transactions with popular cryptocurrencies to taxation. I believe that it is also necessary to take into account the wide spread of operations with cryptocurrencies in e-commerce and to work out the possibility of control by the tax authorities of the turnover of the crypto market and its legal regulation,” said Arabov.

Taking his turn, Executive Director of Azerbaijan’s Center for Analysis of Economic Reforms and Communication Vusal Gasimli said that the blockchain technology will greatly facilitate operations among Azerbaijani banks.

“This approach is already being applied by the banks of India and Ireland,” he noted. “This may become an alternative to the clearing system we got used to. The application of blockchain technology in interbank operations means switching to a new level. From this point of view, I think it is necessary to analyze such application of blockchain technology and start to use it in operations among banks in Azerbaijan.”

During the two-day conference, financial technologies, blockchain, cryptocurrencies and other innovations in the market, as well as possible risks associated with their use will be discussed. 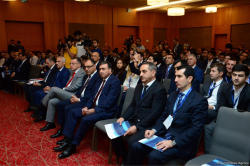 Gold price up in Azerbaijan

Azerbaijan exports goods worth $15.3m via “single window” in March 2020