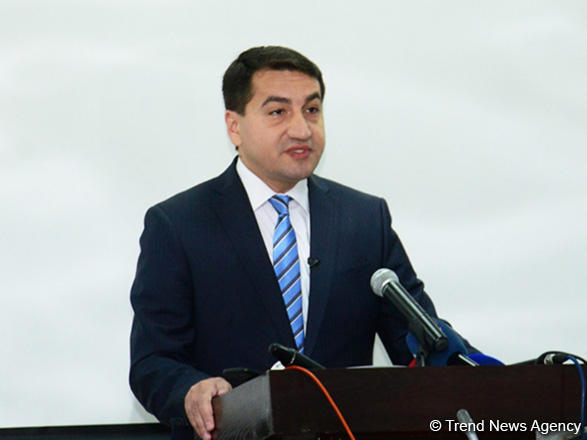 Armenian leadership’s attempts to demonstrate the Armenia-Azerbaijan Nagorno-Karabakh conflict as a conflict over the protection of human rights and assert that Azerbaijan demands territories without the Armenian population are completely unfounded and nonsense, deputy head of the foreign relations department of the Azerbaijani Presidential Administration Hikmet Hajiyev told Trend on Oct. 12.

Hajiyev stressed that Armenia, contrary to the UN Charter, by using force, occupied the territories of Azerbaijan - Nagorno-Karabakh region and seven adjacent districts and created a separatist regime on those territories.

"Armenia has committed numerous war crimes against Azerbaijan, crimes against humanity, by grossly violating the international humanitarian law,” he said.

“Having carried out bloody ethnic cleansing against the Azerbaijani community of the Nagorno-Karabakh occupied by Armenia and the residents of the surrounding areas, the country openly demonstrates that it aims at the illegal annexation of these territories without the local Azerbaijani population,” Hajiyev added.

He also said that Armenia’s talks on human rights when it grossly violates the most fundamental rights of more than a million Azerbaijani internally displaced people and refugees, and goes beyond all political, legal and moral frameworks.

“Fundamental human rights and freedoms are universal and must be applied on an equal basis without discrimination,” he said. “As fixed in the Vienna Declaration and Programme of Action (1993), all human rights are universal, inseparable, interdependent and interrelated."

“Armenia’s such claims are nothing more than hiding the aggressive policy, creating an untrue impression of the real affairs and attempts to divert international community’s attention from the fact of Armenia’s aggression against Azerbaijan and the military occupation of the Azerbaijani territories, which is the basis of the conflict,” he said.

"Armenia must understand that military aggression and the situation, accompanied by bloody ethnic cleansing and gross violation of human rights, will never be considered legitimate,” Hajiyev said.

“Therefore, the international community unanimously accepts and supports the territorial integrity and sovereignty of Azerbaijan within internationally recognized borders,” he said. “Armenia’s claims on the creation of a democratic and civil society, without stopping an aggressive policy and fulfilling international legal obligations, are nothing more than words."

“As opposed to the mono-ethnic Armenian state, Azerbaijan is a multicultural country with an inclusive society,” Hajiyev said.

"Various ethnic and religious communities live together peacefully in Azerbaijan for many centuries,” he said. “Today, thanks to the state policy, these traditions are further strengthened.”

“According to the requirements of the corresponding resolutions of the UN Security Council, the withdrawal of Armenian troops from the occupied Azerbaijani territories, the return of displaced people to their homeland, there may be a possibility for the Armenian and Azerbaijani communities of Nagorno-Karabakh to live together within the territorial integrity, sovereignty and internationally recognized borders of Azerbaijan. Finally, permanent peace, stability and security will be ensured in the region.”