Nadezhda (Hope) International Art Competition has been solemnly held in Baku, bringing together young talents from Russia, Turkey and Georgia.

The contest was co-organized by the Azerbaijan Youth Union and the Dance Association with the support of the Cultural Ministry and JamGroup to reveal and develop the creative potential of the younger generation.

Speaking about the event , the head of the Azerbaijan Dance Association and board member of the Youth Union, Aziz Azizov expressed his gratitude to art directors for their patience and the work that they put into their students as well as jury members for their fair decisions and invaluable contribution to the development of art in Azerbaijan.

To ensure the objectivity, the names of participants, studios or schools were not announced. The professional jury evaluated only the performance. The winners were determined by registration number. 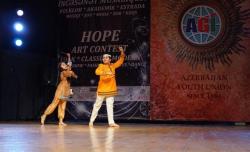