Fascinating week of jazz has came to the City of Winds this December.

The event, organized by Goethe-Zentrum Baku, gathered one of the most talented musicians from Germany, Turkey, Georgia, Kazakhstan and Azerbaijan.

A series of cultural events within the framework of the festival, which is held for the first time, includes concerts of foreign and local singers, exhibitions and performances of talented artists.

In his speech, Alfons Hug said that the main goal of Goethe-Zentrum Baku is not only to promote German culture with a series of concerts and exhibitions, but also to establish international artistic cooperation.

The festival was opened by a wonderful concert of the German music band LebiDerya. The gala concert took place in  German-Azerbaijan Cultural Society "Kapellhaus".

With its mixture of musical poetry and pulsating energy, music band delighted listeners. LebiDerya quartet explores the musical dialogue between East and West. The musicians masterly play oriental musical instruments, including ud and zarb, along with Western instruments - cello and trumpet.

The fusion of oriental motifs and jazz rhythms amazed the audience, who enthusiastically applauded the musicians, and at the end of the concert asked them to perform one more encore.

A special form of oriental jazz created under the influence of chamber music, folklore and electro acoustic percussion is the result of the hard work of the band, which, by the way, plans to create a synthesis with Azerbaijani folk music - mugham.

Notably, LebiDerya held a master class on December 5. The soloist  Joss Thornball, was surprised by the fact that  many professionals visited his workshop.

"I did not expect that the master class would be held at such a high level. I was very pleased to hear very professional questions and it was interesting to answer them. Baku surpassed all my expectations," the musician said.

So, don't miss a series of fascinating concerts with participation of talented musicians who represent the diversity and richness of musical cultures . 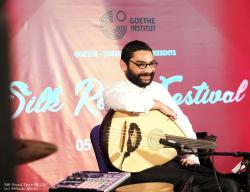