Spectacular show "Khari Bulbul" was presented by the cavalry of the Azerbaijani State Border.

Her Majesty Queen Elizabeth II and the members of the royal family were presented with a music piece "Khari Bulbul", dedicated to Azerbaijan's victory in the 2020 Nagorno-Karabakh War.

The spectators enjoyed the state flags of Azerbaijan and the United Kingdom fluttering in the hands of the riders, the synthesis of elements of the Azerbaijani national dance with equestrian sports.

The show brilliantly showcased Azerbaijan's rich culture, courage and heroism as well as graceful Karabakh horses, known as one of the rare species in the world and the oldest in Asia and the Caucasus.

Chovqan is a traditional horse-riding game played between two teams mounted on the Karabakh horses. Chovqan is the predecessor of modern polo. The horse racing was held during holiday festivities.

Each team has five riders, with two fullbacks and three forwards. The game starts at the centre of the field and players use wooden mallets to try to drive a small leather or wooden ball into their opponents’ goal. The game lasts 30 minutes. There is no age limit in this sport.

In 2013, UNESCO decided to include the game of chovqan on its Intangible Cultural Heritage List.

There are many historical facts, which prove that this sport has ancient origins.

As a result of archaeological excavations conducted in the Oren-Kala area, a vessel with images of fragments of the game Chovgan was found, which indirectly confirms the existence of this game in the 11th century in the city of Beylagan (in south of Azerbaijan).

Moreover, chovqan game is mentioned in Nizami's  poem "Khosrov and Shirin", as well as in the epic "Kitabi Dede Gorgud" (the Book of Dede Gorgud).

The 11th century miniatures of the "Khosrov and Shirin" poem and Tabriz miniatures illustrate different scenes of this game. Detailed descriptions of the rules of the game are also found in ancient manuscripts.

Chovqan tournaments are being held in Azerbaijan. This sport is still popular in the country's regions. 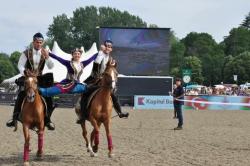 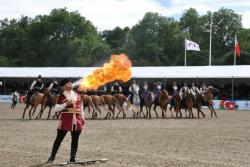