Azerbaijan’s military units have taken necessary measures to get ready for the winter, the Defence Ministry has reported.

Under the 2021-22 autumn-winter season preparation plan, supply and maintenance work has been carried out in the military units, the transition of weapons and equipment have been organized, the ministry added.

“A reliable defence system has been established in the high mountainous areas of the Nakhchivan Autonomous Republic, which are surrounded on all sides by mountain ranges,” the report added.

The ministry underlined that observation posts, trenches, and communication lines in the units and positions, which are stationed in difficult terrains, had been established to deal with unfavourable weather conditions.

The supply roads and defence positions had been built and renovated with the help of engineering equipment, hospitals and military medical centres had been provided with necessary medical equipment to prevent viral infections and infectious diseases in cold weather, the report added.

It was noted that the Combined Arms Army conducted the transition of all types of weapons and equipment to the winter season to ensure their uninterrupted and stable operation during the winter months.

At the end of all activities, each sample of weapon and military equipment is checked and the results are evaluated.

Meanwhile, Defence Minister Zakir Hasanov has visited military units stationed in the liberated Kalbajar and Lachin regions to inspect their readiness for winter, the ministry reported on October 21.

Hasanov was informed that the barracks and offices in the military units had been provided with an uninterrupted heating system, and the transition of weapons and equipment to the autumn-winter season had been organized.

It was noted that the military personnel had been provided with the all necessary supply in line with standards. The units deployed in high mountainous and harsh climatic areas had been supplied with additional provisions.

All military units were provided with high-quality fuel and lubricants, other necessary spare parts to ensure the uninterrupted and stable operation of weapons and equipment during the winter, the report added.

The minister was briefed that all the necessary measures had been taken to increase the combat capability of military units and to ensure uninterrupted operation in harsh climatic conditions, mountainous areas.

It was noted that that the units of engineering troops along with the relevant government agencies are carrying out the construction and restoration of roads in difficult terrain.

Hasanov gave relevant instructions on improving the social and living conditions of servicemen and speeding up the construction of settlements. 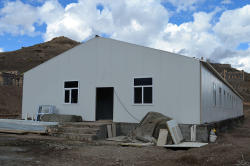