The public flogging of Yerevan in Brussels on June 18-19 on the sidelines of a video conference of leaders of the EU countries and the Eastern Partnership is nothing but a political catastrophe in Brussels for Armenia. 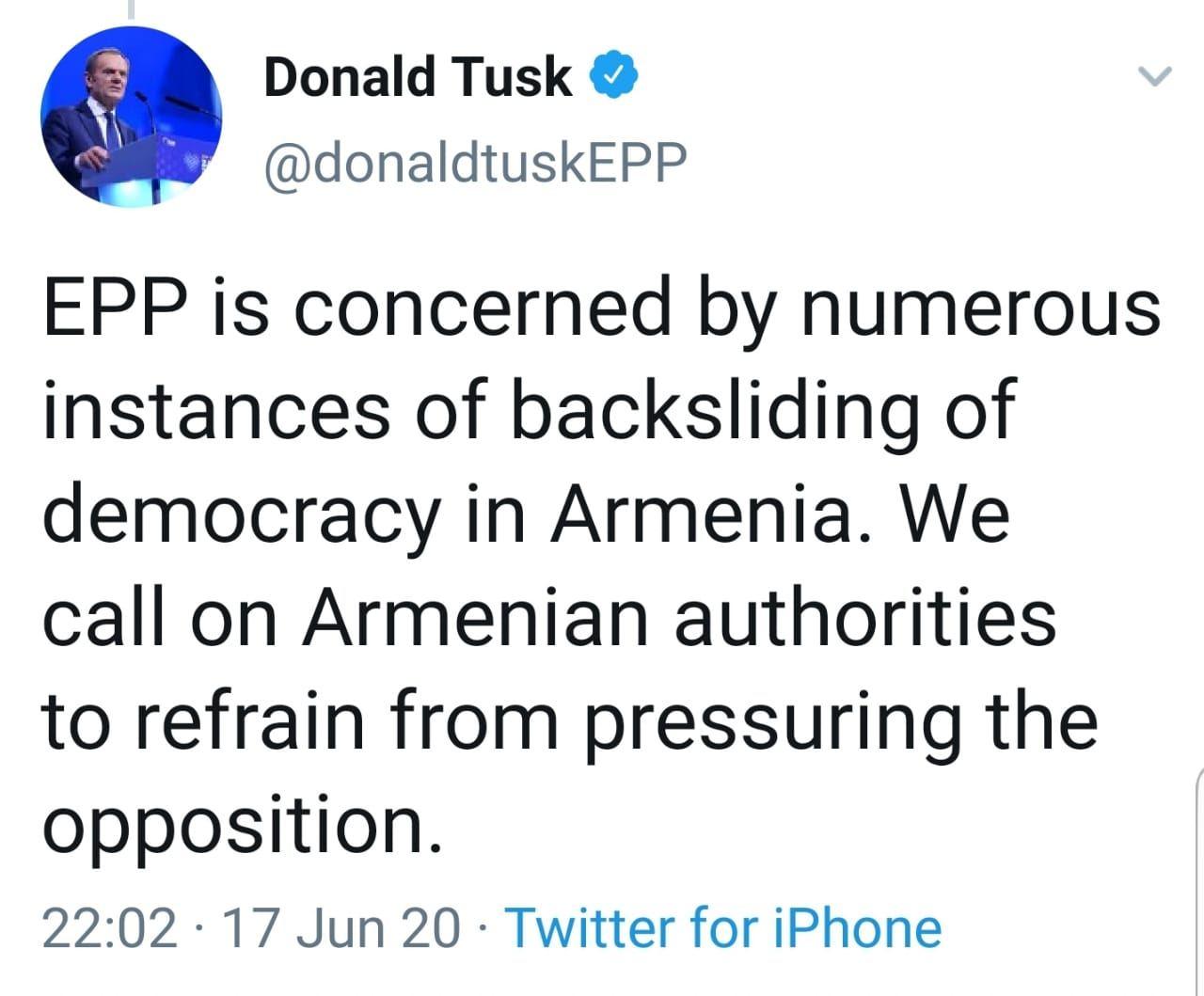 During these two days, all the EU institutions without exception adopted an unprecedented number of documents that can be briefly described in two words as the political catastrophe for Armenia.

Conflict Resolution section of the statement outlines the support for the territorial integrity of the countries within the internationally recognized borders. This position was determined as a priority of the EU policy towards the Eastern Partnership countries.

This is the first time in the EU history, when the support for territorial integrity within the internationally recognized borders was used in terms of resolving all conflicts in the Eastern Partnership countries, including Azerbaijan.

Another impressive feature is that Tusk’s statement was adopted following a video conference of the European People’s Party. The messengers of the Republican Party triumphantly informed about participation of Armenia’s ex-President Serzh Sargsyan in this video conference.

On the eve of the Summit, Tusk prepared a "surprise" not only for the former leader, but also for incumbent leader of Armenia Nikol Pashinyan. In his tweet, Tusk severely criticized the current regime, exposing repression against opponents. This was the severest criticizm made ever in recent years. 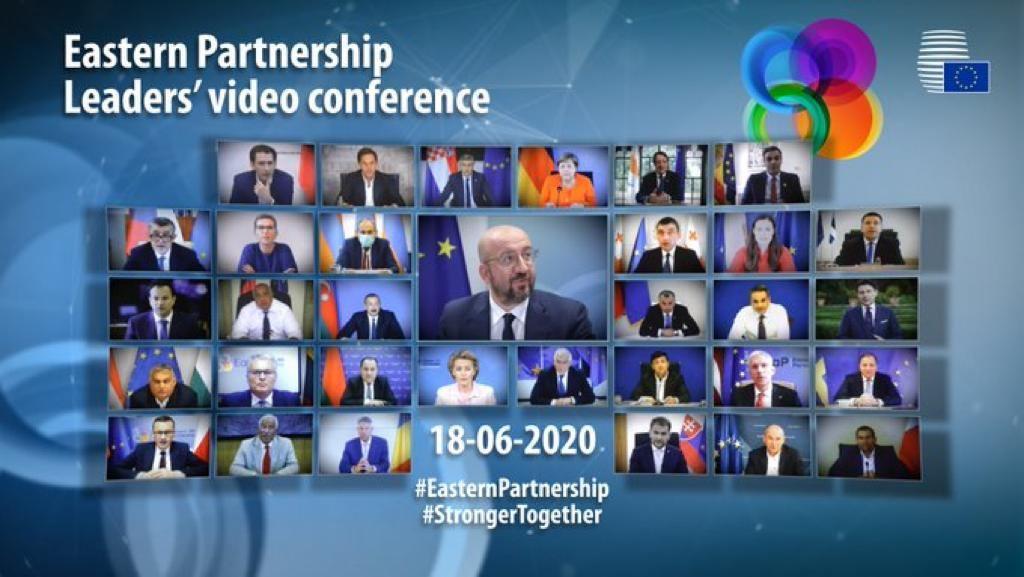 Tusk’s political intonation was supported by Member of the European People’s Party, Prime Minister of Croatia Andrej Plenkovic. As the leader of the country presiding in the EU, he made an official statement at the Summit expressing clear support for the territorial integrity of the Eastern Partnership countries.

This support was expressed by the majority of leaders who delivered speeches at the Summit. But in accordance with the EU fundamental documents, the statement of the country presiding in it must be considered as the position of the entire EU.

In his press statement following the Summit, current President of the European Council Charles Michel stressed "the responsibility to maintain the international order and international law shared by all EU countries.” 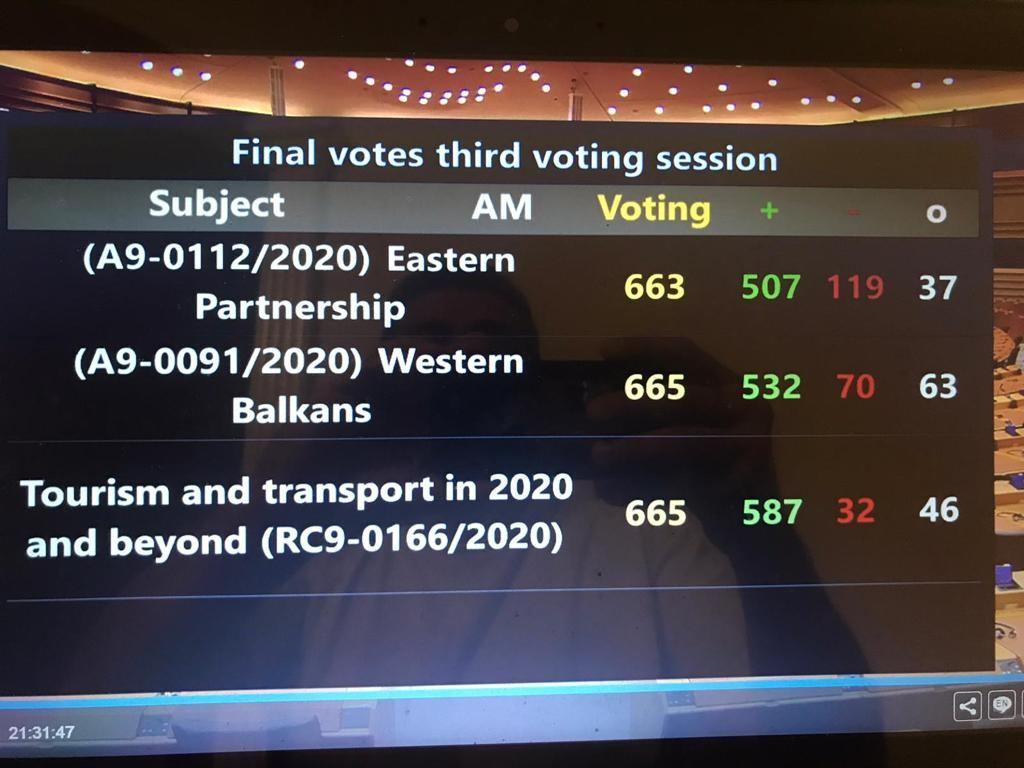 Michel emphasized the importance of the new EU agreement with Azerbaijan, the negotiations on which are being held intensively. In her press statement, Ursula von der Leyen focused on the practical results of the EU cooperation with the Eastern Partnership countries.

“If you look at the increase of trade volumes between 2016 and 2019, the bilateral trade volumes between the EU and all our six Eastern Partnership partners has increased substantially. For example, by as much as 55 percent with Azerbaijan and 50 percent with Ukraine. We see also that the intra-regional trade has more than doubled,” said President of the European Commission Ursula von der Leyen.

There are many other examples, testifying to the unambiguous and irreversible position of the majority of political actors in Brussels regarding the support for Baku and the clear messages to Armenia.

The position of the European Conservatives and Reformists Party or the EU statement on neighborhood policy made following the Summit and testifying to the support for the territorial integrity of the Eastern Partnership countries can be cited as an example.

But the most impressive feature was the resolution of the European Parliament, adopted by a crushing majority of votes (507 - for, 119 - against) on June 19 evening and entirely devoted to the Eastern Partnership.

The reference to the resolution of the European Parliament dated May 20, 2010 “Requirement for the EU strategy in the South Caucasus” was made in the preamble of the document.

The territories occupied by the Armenian armed forces were called "occupied" in paragraphs 8 and 10 of this document. In this document, the European Parliament expressed support for the territorial integrity of the three regional countries without any motion of self-determination featured in the Armenian interpretation.

The need to resolve the conflict on the basis of international law, stipulated in the UN Charter and the Helsinki Final Act, dated 1975, was reiterated in the recent resolution of the European Parliament and again without the manipulation of the term “self-determination of nations” favored by Armenians.

In accordance with the first part of paragraph (M) of the preamble of the resolution, "the independence, sovereignty and territorial integrity of the Eastern Partnership countries have been still undermined by unresolved regional conflicts, external aggression (!) and ongoing occupation (!) of some of these countries ..." .

"Undermining human rights" has been stressed as the negative consequences of external aggression and occupation. This is an insurmountable challenge for Armenia, positioning itself as an "outpost" of democracy in the region (an outpost again – we've had enough of it!).

The European Parliament points out that these rights of the victims of external aggression and occupation - refugees and internally displaced people have been violated.

The European Parliament’s established position on the EU support for the sovereignty, territorial integrity and political independence of the Eastern Partnership member-states within the internationally recognized borders has been reaffirmed in its resolution as of June 19.

The "support [by the EU] for the efforts of [states] to fully implement these principles" was expressed in the same paragraph of the resolution. Thus, the European Parliament not only recognizes the right of states to ensure sovereignty and territorial integrity by force within the internationally recognized borders, but also supports these efforts. This is more than an obvious signal to Yerevan.

Paragraph (b o) includes the immediate withdrawal of foreign troops from all occupied territories of the Eastern Partnership countries, in the territories of which there are occupation forces. This also applies to Azerbaijan, the lands of which have been occupied by the Armenian armed forces.

All these resolutions, statements and other documents have been adopted just within the past two days. Along with the recent statement made by the group of the MEPs on the construction of a new road by Armenia in the occupied Azerbaijani territories, they are creating a large-scale mosaic of the complete discrediting of Armenia’s policy towards Europe.

Any attempts by Goebbels propaganda (both Pashinyan’s team and its opponents in Armenia) to level this political catastrophe in Brussels are doomed to failure.

The EU made its massive and, perhaps, last warning to the aggressor. It does not want and can no longer put up with aggression in neighboring countries, which turns into a threat to the European development model itself. The curbing of the occupiers is becoming a concern not only for Azerbaijan, but also for our European partners.

Perhaps, this is the meaning of the successively repeated political achievements of the Azerbaijani president. Each of them brings closer the international legal recognition of our future victory, not necessarily military, but definitely fast, complete and irrevocable.