A rally has been held in Tel Aviv, Israel in protest against Armenia’s recent military provocations on the border with Azerbaijan that killed 12 Azerbaijani servicemen and a civilian.

Around 600 people of Azerbaijani origin, including those from the cities of Karmiel, Acre, Bat-yam, Holon and Rishon LeZion, took part in the rally organized by the "Azerbaijan House in Israel", the State Committee on Work with Diaspora reported on August 10.

“We declare with full responsibility to the whole world and most importantly, to the Armenian occupiers that the Armenian-Azerbaijani Nagorno-Karabakh conflict is both our tragedy and pain since truth and justice are on Azerbaijan's side,” head of Azerbaijan House in Israel Nehamia Shirin Michaeli who organized and led the rally said.

“In this terrible war against the Armenian occupiers, Jews and Azerbaijanis have always fought together - we lived, rejoiced and fought together. We are proud of the fact that in this war against the Armenian invaders, one of the first national heroes of independent Azerbaijan was our brother Albert Agarunov, who became a symbol of courage and brotherhood of the Azerbaijani and Jewish peoples," Michaeli stressed.

Rally participants issued a statement condemning the military provocations committed by the Armenian occupying forces on the state border in the direction of Tovuz. It was noted that as a result of the decisive response of the Azerbaijani Armed Forces, the Armenian occupiers withdrew and suffered heavy losses.

They demanded the Israeli government and the world community to condemn Armenia for committing Khojaly genocide and to take decisive steps to liberate Azerbaijan’s occupied Nagorno-Karabakh regions and seven adjacent regions.

Recent Armenian aggression on the border with Azerbaijan has prompted rallies in various cities across the world. 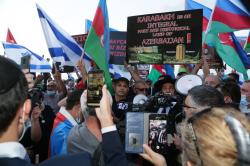