Azerbaijani football club Qarabag qualified for the next round in the UEFA Champions League.

As part of the matches of the first qualifying round of the UEFA Champions League for the season 2020/2021, the match was played between Qarabag and its Northern Macedonian rival “Sileks” at the Republic Stadium named after Tofig Bahramov in Baku on August 18.

Keeping Sileks from scoring a goal, the Azerbaijani champion advanced the second qualifying round in the Champions League with a decisive victory of four goals.

Opening the score in earlier minutes of the match, Romero Jaime was assisted by his teammate Philip Ozobic. With the goal of Donald Guerrier in 40’, Qarabag ended the first half with the clean sheet.

The third goal also came from Donald Guerrier, doubling against Sileks, scored in 51’ with the assist from Jaime. The last goal of the match came from Azerbaijani striker and club’s top scorer Mahir Emreli in 80’, assisted by Ozobic.

During the match, the Northern Macedonian club could make only five attempts, while the Azerbaijani team recorded eleven attempts of which five were on target.

Thus, Qarabag will play against Moldovan club Sherrif in the second qualification round on August 26.

Due to the COVID-19 pandemic, all the matches in both Champions League and Europa League are held in only one leg, therefore; the revenge will not be held.

Formed in 1987, Qarabag football club originates from Azerbaijan’s Armenian-occupied Agdam town that has turned into a “ghost town” due to the scale of its destruction during the war but has not played in its hometown since 1993 due to occupation. The club is now based in capital Baku.

It should be noted that on May 2014, beating the Netherlands club Twente, Qarabag qualified for the 2014-2015 UEFA Europa League group stage for the first time in its history and became the second Azerbaijani team reaching the European competitions group stage. In 2017, Qarabag became the first Azerbaijani club to qualify for the group stages of the UEFA Champions League after beating Danish club Copenhagen and drew in the Group C alongside Chelsea, Atletico Madrid and Roma.

The crest on the club emblem is the symbol of the Karabakh, which was produced by English designers and based on the Karabakh horse and stems from the club's nickname "The Horsemen". 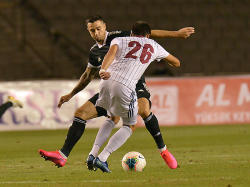 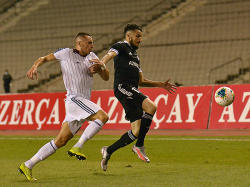