Azerbaijan has turned into the country contributing to the European energy security and diversification of its energy sources, Azerbaijan Energy Minister and Chairman of the Energy Charter Conference Parviz Shahbazov has stated.

During the forum, Shahbazov noted energy projects implemented by Azerbaijan as one of the leading energy centers and important role of the country in the world energy architecture.

It was noted that this year, Azerbaijan's chairmanship of the International Energy Charter Conference is the logical result of the initiatives and achievements of Azerbaijan in recent years, as considerable part of them is related to the energy sector.

Moreover, it was noted that Southern Gas Corridor projects has already been finalized and starting from the end of 2020 the Azerbaijani gas will be brought to the European customers.

Likewise, the acceleration of the energy transition by increasing the share of renewable energy sources in transport, heating and electricity generation has been declared a priority since Azerbaijan took over the Chairmanship of the Energy Charter Conference for 2020.

Furthermore, the minister briefed the sides on the work done during the Azerbaijani chairmanship, noting the modernization of the Energy Charter agreement, Energy Investment Risk Assessment, preparation for the next ministerial conference planned to be held in Baku and work done in other fields for the purpose of expanding cooperation between the member states.

Additionally, participants of the forum were informed about the reforms carried out in the energy sector in the country, including drafting of legislative acts, institutional changes and implemented projects.

It was noted that apart from shelling the cities and villages far from the conflict zone, the Armenian armed forces fire at energy infrastructure of Azerbaijan, as they launched ballistic missiles at the largest power plant in the region, Azerbaijan Thermal Power Plant, and the Baku-Tbilisi-Ceyhan main export oil pipeline.

Moreover, the minister noted that in July, Armenian armed forces attacked Azerbaijan on the interstate border, in the region of Tovuz, through which the South Caucasus Corridor passes, putting such an important pipeline for the energy security of Europe at risk.

He called the partner countries to condemn Armenia’s aggression, particularly its targeting of the strategic international energy projects and put an end to the criminal military attacks, which endanger international peace and security.

Secretary General of the ECO Secretariat Hadi Soleimanpour expressed deep concern over Armenia’s attacks on the energy and transport infrastructure of Azerbaijan and noted that such an aggressive approach could be detrimental to overall regional energy security.  In addition, stressing the importance of peace and stability in the region in order to achieve sustainable socio-economic goals, he expressed his support for the peaceful settlement of the conflict based on the sovereignty, territorial integrity and inviolability of internationally recognized borders of Azerbaijan.

Secretary-General of Energy Charter Urban Rusnak expressed his gratitude to the chairmanship for continuous support and guidance provided to the Energy Charter Process throughout the year, noting that despite the pandemic and associated limitations, it was possible to make substantial progress on the most important issues on the agenda, such as modernization of the conclusions of the Review. In addition, he stated the important role of renewable technologies in the global energy mix during the past decade.

Moreover, Head of Administration of the Azerbaijan Energy Ministry Zaur Mammadov noted steps taken to ensure energy efficiency in Azerbaijan, stressing the importance of the draft laws and the adoption of these laws in the regulation of this field.

The Minister of Energy of Azerbaijan Parviz Shahbazov, Secretary General of the Energy Charter Urban Rusnak and Director of Energy Policy, Directorate-General for Energy, European Commission Ms. Cristina Lobillo Borrero delivered a speech at the forum on “Transition to renewables in power generation, transport, heating and cooling: modern challenges and trends”.

About 190 participants, including state officials from 40 countries, representatives of international organizations, energy companies, research centers, as well as mass media, participated in the forum.

It should be noted that Azerbaijan has been cooperating with the International Energy Charter for more than 20 years. The decision on Azerbaijan`s chairmanship over the Energy Charter Conference in 2020 was made in 2018. 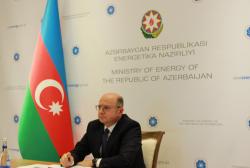