Bayramov and Blinken met on the sidelines of the 28th meeting of the OSCE Ministerial Council held in Stockholm on December 2.

Bayramov briefed his counterpart about the regional situation that emerged following the trilateral ceasefire deal signed by Armenia, Azerbaijan and Russia on November 10, 2020.

He briefed Blinken about the scale of destruction in the liberated areas, the threat of landmines, the causes of tension at the border, the rehabilitation of the liberated territories carried out by the Azerbaijani government.

The sides also touched upon the development of cooperation in the economic, energy, security and other fields.

The government officials highlighted Azerbaijan’s contribution to the energy sector, as an initiator and executor of important oil and gas projects. It was stressed that Azerbaijan is an important factor in ensuring the European Union’s energy security.

Blinken stressed Azerbaijan’s participation in international peace and security issues, including its peacekeeping activities in Afghanistan.

Moreover, Azerbaijan’s fight against organized crime, terrorism, illicit drug trafficking, as well as a number of threats and challenges to peace and security was underlined.

The sides also discussed regional and global issues of mutual interest as a part of the meeting.

Azertag reported on December 2 that the United States and France welcomed the continuation of the dialogue between Azerbaijan and Armenia.

The statement came from US State Secretary Blinken and French Minister Delegate for Foreign Trade and Economic Attractiveness Franck Riester at a meeting of the OSCE Ministerial Council in Stockholm, Sweden.

Blinken emphasized the importance of resuming direct talks between Armenia and Azerbaijan following the war.

He also urged both countries to begin work on the delimitation and demarcation of the Azerbaijani-Armenian border, as well as restoring economic ties and transportation links.

In turn, Riester stressed the importance of Armenian-Azerbaijani talks to resolve the existing problems and ensure the participation of existing OSCE institutions in the process. 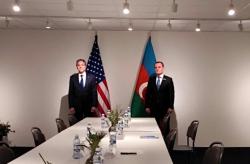