The drills are aimed to improve the skills of the military personnel in managing surface-to-air missile systems.

"During training, combat crews fulfill the guidelines for getting “Ildirim” (“Lightning”) surface-to-air missile systems into the starting position and preparing it for combat use", said the report.

In the meantime, the troops of the Nakhchivan garrison held special training sessions with the commanders of the engineer sections on 29 April. "

During the training sessions, the servicemen performing engineering support tasks improved their skills to act both individually and collectively", the ministry said.

The ministry also noted that the passage for motorized rifle and tank units was organized in the terrain with natural and artificial obstacles using engineering equipment.

"The military personnel worked out explosive skills", the report added. 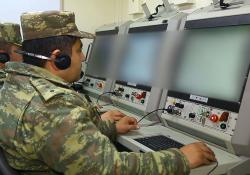