The awards ceremony was held at the Sheraton Istanbul City Center in Istanbul with the participation of laureates from Turkey and Europe, representatives of the world of art, fashion, sports, public life and the media.

The hosts of the evening were Turkish stars Tugba Ozay and Emre Buga.

Azerbaijan was also represented by host and organizer Ayaz Mammadov (Organizer of the Year), writer Movsum Amir Aslan (Writer-Discovery of the Year).

Samira Efendi represented Azerbaijan at Eurovision 2021 final with the song "Mata Hari" and took place the 20th place. She thrilled Eurovision fans with stunning performance that featured a giant orb in the background.

During the show, Samira Efendi thrilled Eurovision fans with the song "Cleopatra" about trusting your gut instinct, standing up for yourself and being a "Queen" - even when things get tough and especially if someone betrays or hurts you. 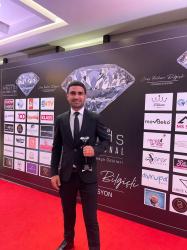