Before the opening of the new theatrical season, the theater director, Honored Art worker Aligismet Lalayev congratulated the viewers with National Music Day. He stressed that the theater is planning to presented other works of prominent composer such as "If Not That One, Then This One", "The Cloth Peddler", etc.

It should be noted that it has become a good tradition for the theater to open each new season with the musical comedy "Husband and Wife". This production is one of the most successful and beloved by all theater lovers. The musical comedy was successfully presented abroad. 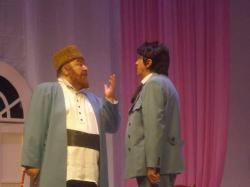