Grand Prix de la Culture is a joint project of Wiener Privatbank SE and the International Artists Agency Hollaender-Calix. The prize has been awarded since 2014 for achievements in various art fields.

Eyvazov received the prize in recognition of his successful performances on various opera stages around the world.

Speaking about the prize, Yusif Eyvazov expressed his deep gratitude to the founder of the award Adrian Hollander.

"So happy and honored to receive this amazing price GRAND PRIX DE LA CULTURE 2020. Would love to thank Mag. Adrian Hollaender for such an honor!! This is so important and so precious for me. Also, thanks to my dear colleague Margarita Gritskova mezzosoprano, who sang beautiful at the event and amazing pianist Petra Pogady Hollaender for such a gift!," he said.

Eyvazov´s repertoire includes the roles of Alfredo in "La Traviata", Cavaradossi in "Tosca", Renato des Grieux in "Manon Lescaut", Kalaf in "Turandot", Andrea Chenier in "Andrea Chenier", Rodolfo in "La Boheme", Don Carlos in "Don Carlos" and many others. 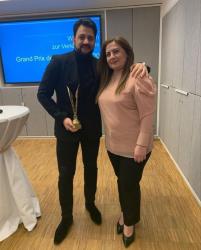