In his speech, the chairman of the  Azerbaijan Artists' Union, People's Artist Farhad Khalilov praised Farzaliyev’s work. He stressed that the artist is known not only in Azerbaijan, but also far beyond its borders.

Touching upon Farzaliyev’s activity as the director of the museum, Khalilov emphasized that he has raised the museum's level.

"Thanks to Chingiz Farzaliyev, his tireless working capacity, internal culture and deep knowledge of his work, vernissages, meetings and other events held here are always organized at the highest level," said Khalilov

Azerbaijani Culture Minister Abulfas Garayev emphasized that the exhibition "By the Steps of Time" is an event that art fans have been waiting for a long time.

Garayev noted that last year, President of Azerbaijan Ilham Aliyev signed a decree on awarding Chingiz Farzaliev with the Shokhrat Order for his contribution to the Azerbaijan's fine art.

He added that Farzaliyev is a prominent representative of the Azerbaijani school of painting. The artist is a holder of honorary awards, orders and medals of several foreign countries.

In his speeches, Rector of the Azerbaijan State Academy of Arts, People's artist Omar Eldarov, former Georgian Minister of Culture Valery Asatiani, rector of the Baku Academy of Music, People's artist of the USSR Farhad Badalbayli, chairman of the parliamentary committee on culture, director of the National Museum of Azerbaijani Literature, professor Rafael Huseynov and others spoke, praised  Farzaliyev’s work as the museum director.

Chingiz Farzaliyev, in turn, expressed gratitude to all participants of the event. Speaking about his exhibition, he said that the exposition "On the Steps of Time"  includes his works from the very first artistic experiments to his last paintings.

He emphasized that the state pays great attention to the preservation and development of culture and art.

The guests then viewed the exhibition, divided into several stages: the seventies, eighties, nineties and the period at the turn of the century.

The event participants also got acquainted with Farzaliyev’s research activities - books on art, which have become teaching aids, including the fundamental series "Servet", which consists of 36 books dedicated to 20th century famous representatives of fine art in Azerbaijan. 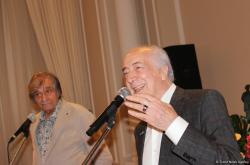 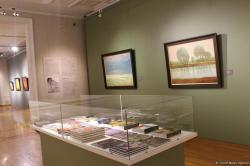