The models are representing Azerbaijan at Miss & Mister Planet of the World 2019 world final in Georgia, Trend Life reported.

Nigar Hasanzade and Siraj Beyalizadeh visited the sights of Tbilisi and the country's regions; appeared as guests of Imedi TV and Rustavi 2 television project - Georgia's Got Talent, where they were dressed in national costumes and performed the Azerbaijani national dance "Uzundere".

The contest organizers Eka Mgaloblishvili and Irina Papazova noted that Azerbaijani contesants have great chances of success. The final will take place on October 21.

The hosts of the evening were Elvin Mardanov and Medina Abdullayeva. 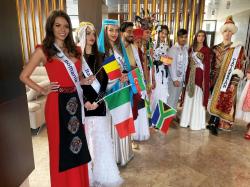