Through his art, Simon Arns strived to create a bridge between Sweden and Azerbaijan, Stockholm and Baku. His wonderful art works were highly appreciated by the viewers.

Meanwhile, the exhibition coincided with the 39th anniversary of Dadash Mammadov, the head of  Arts Council Azerbaijan (NGO) and Art Tower Gallery director.

Workshops are also planned to be held on September 28-29. Azerbaijani and Swedish artists will take part in the workshops.

The exhibition is co-organized by Arts Council Azerbaijan, the Embassy of Sweden in Azerbaijan, and the Icherisheher State Historical and Architectural Reserve.

He describes his style as a dynamic capture of reality through movement and spontaneity. He is not interested in the movement of painting or something beautiful, he thinks that this will always happen when you find something that really works.

The central objects of Arns’ works are beautiful sculptural masterpieces, many of which are known to the general public.

The main purpose of the organization is to promote the Azerbaijani culture and art. Many projects have been operating for many years under the auspices of the organization. Among them are Art Gazette, Production Studio, Azerbaijan Animation Museum named after Nazim Mammadov, Art School drawing school, Under Open Air plein air, Art Residence and Youth Network. 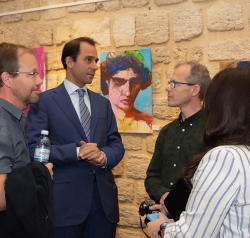