Their participation was organized with the assistance of the Azerbaijani Embassy in Kazakhstan and the International Fund for Turkic Culture and Heritage, Trend Life reported.

National musicians Sahib Pashazade and Kamran Karimov mesmerized the audience with the brilliant performance of mugham. Vusala Alizade became the only representative from another country, who appeared on the stage as the hostess of the evening.

"The festival was organized at a very high level. There was a tremendous atmosphere of friendship and mutual understanding, we were surrounded by care and attention and felt at home.The Turkic peoples are related in spirit, they unite us a lot, we have the same roots, religion, culture, traditions, which have been going on for centuries", said Alizade.

"We constantly communicated with representatives of other countries, learned customs and shared impressions. During the festival I was on stage in the Kazakh and Azerbaijani national dresses from the famous designer Gulnara Khalilova, which caused a lot of warm and kind words from the guests. The festival has become a great holiday of the Turkic peoples ", she added.

As part of celebrating the 20th anniversary of Astana, the festival was held from July 4 to July 5 in the Chamber Hall of the Astana Opera House.

The concerts of the Astana-Arkau Festival featured almost all Turkic peoples` music that performed by high-level masters from Azerbaijan, Kazakhstan, Turkey, Iran, Russia, Uzbekistan, Kyrgyzstan, Mongolia, China and other countries.

Founded in 2008, the festival aims to demonstrate the unity of the Turkic world and the Turkic musical civilization. 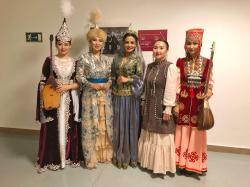