First meeting of CEPI held on work plan for 2021 [PHOTO] During the meeting, the work plan for 2021 was discussed and approved, the project coordinator was elected.

Moreover, in accordance with the CEPI strategy, SOCAR's new project idea on the use of alternative and renewable energy sources in the Caspian region reviewed and included in the work plan.

Additionally, an agreement was reached to organize events and training aimed at reducing greenhouse gas emissions to zero in 2021 and to keep the population informed about environmental protection.

Earlier it was reported that a Memorandum of Understanding on Caspian Environmental Protection Initiative was signed at the Center for Environmental Studies by SOCAR President Rovnag Abdullayev, Chairman of KazMunayGas Alik Aidarbayev, President of BP Gary Jones, Regional Manager of Equinor Absheron in Azerbaijan Fawad Quraishi and Managing Director of Total E&P Absheron B.V. Regis Agut on September 14.

To combat climate change, that threatens the environmental sustainability of the Caspian region, the Caspian Environmental Protection Initiative was established under the initiative of SOCAR, KazMunagGas, BP, Equinor Absheron and Total E&P Absheron B.V. Moreover, Rosneft, Gazprom and Eni have announced their intention to join CEPI, while the United Nations, UNDP and the World Bank have announced their intention to join as observers.

The goal of the CEPI Action Team is to take joint proactive measures to combat climate change, which threatens the environmental sustainability of the Caspian region, and to prevent greenhouse gas and hazardous emissions into the environment.

It should be noted that by signing the Paris Agreement adopted at the 21st Conference of the UN Framework Convention on Climate Change, the Republic of Azerbaijan has demonstrated its intention to reduce greenhouse gas emissions and pave the way for an environmentally sustainable future. In order to achieve the goals of the Paris Agreement, the State Oil Company of Azerbaijan is constantly implementing the most advanced environmental measures and solutions to ensure environmental safety and efficient use of resources, reduce carbon intensity and ensure sustainable development of the region. 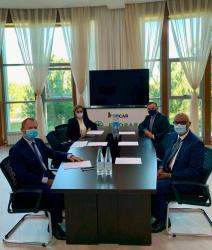