Historical monuments to be explored in Gazakh [PHOTO] Azerbaijan's Gazakh region is filled with mind-blowing historical monuments waiting to be explored.

There are 112 protected monuments in Gazakh region that will certainly give you thrills.

Scientists believe that the foundation of Gazakh region was laid in the 8th century A.D.

The Azerbaijani armed forces liberated the country's territories from Armenia's occupation during the 44-day Nagorno-Karabakh war in 2020.

Gazakh is rich in ancient architectural monuments. The temple belonging to the V-VIII centuries in the village of Yukhary Askipara, the temple of Shekargala, Daireevigala, the Gyzylhadjily bridge, Girmizi korpu (XII century) and others testify to the ancient history of these places.

Let's look through some of these historic monuments.

An ancient Albanian temple in Gazakh`s Yukhari Askipara village was built in the 5th-8th centuries. There is an Albanian cross on the doors of the temple.

The inside columns are decorated with floral ornaments and fish paintings. Several gravestones were discovered in the courtyard of the temple.

The watchtower was erected on the banks of the Choghaz river. The thought-out windows, observation holes, traces of fire intended for warning proves it once again.

The tower is square in shape. The length of each side is 8 m. It was very orderly built of the river stone.

There are strap-patterns made of red baked bricks. The cords connecting the storeys were made of wood. There were supporting buildings in the courtyard. The rooms were built in a style typical for the region in terms of architecture and engineering.

The tower is considered a significant example of the medieval fortifications in Azerbaijan.

Some hypotheses state that it was one of the residences of the Caucasian Albania rulers. The complex stretches for about 2.5 ha and is surrounded by double walls.

Galakend Galasi dates from the 6th-9th centuries A.D. The distance between the walls is about 12 m. In general, the walls are adjusted to the relief and are strategically built in a perfect style.

There are religious, official and household buildings in the inner part of the castle. The most important of them is the temple in the upper part.

Many parts of the temple complex got lost in the course of substantial architectural measurement and exploration works in the 1970s.

The Red Bridge in Gazakh region was built in the 12th century under Atabek ruler Muhammad Jahan-Pahlavan.

The total length of the bridge, similar in architectural style to the Ganja, Khudaferin and Ardabil bridges, reaches175 meters.

The list of exciting monuments cannot be completed without the Gatir Bridge erected over the Askipara River near Yukhari Askipara village.

The length of the bridge is 7.3 m, width in the centre 2.7 m and overall height from its arch till the surface of the river is 5.8 m. The bridge is arched and made from rocky stones. The overall appearance of the bridge span is a semi-circle. 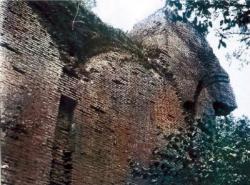