Azerbaijani karate fighters won two silvers and one bronze medals in the sixth stage of the season in Berlin which took place on September 14-16.

Shahin Atamov (+84 kg) was not rewarded with the referee's mistake in the decisive match for bronze medal.  President of the federation Yashar Bashirov attended the awarding ceremony of athletes.

Karate 1-Premier League tournament of the World Karate Federation (WKF) brought together 763 competitors from 72 countries. After returning from tournament, the national team will start preparations for the competition in Japan.

The Karate1-Premier League- is the most important league event in the world of Karate. It comprises a number of the most prominent Karate competitions and endeavors to bring together the best Karate athletes in the world in open championships of unprecedented scale and quality.

The 2018 edition of the Karate 1-Premier League is formed by seven events. The tournament has stopped in Paris (France), Dubai (UAE), Rotterdam (The Netherlands), Rabat (Morocco), Istanbul (Turkey) and Berlin (Germany). The 2018 season will end in Tokyo (Japan) on October 12-14. 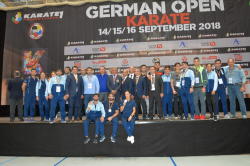