The head of state was informed of the newly-renovated substation. Built 45 years ago, the “Hovsan” substation was reconstructed to modern standards and the equipment here was replaced by the new ones.

The substation plays an important role in improving the quality of electricity transmission produced at the “Shimal [North]”  power station, and in supplying power to Baku and Absheron Peninsula, through connection with the Absheron, Boyukshor, Surakhani, Ramana, Ahmadli, Gala and Zykh substations. It is especially involved in power supplies to Surakhani, Gunashli, Ahmadli areas.

It was noted that the substation, which was built in 1949, had become a potential source of accidents due to the expiration of its service life. Thanks to the work done in a short time, the previous capacity of the substation was restored, its reliability and stability were increased through complete reconstruction, and the basis for uninterrupted and high-quality energy supplies to consumers was ensured.

The development of the energy sector at the level of modern requirements, ensuring citizens' access to and their satisfaction with energy resources are among the priority goals of President Ilham Aliyev's socio-economic policy.

During the inauguration ceremony, the head of state, who pays special attention to the post-war reconstruction on the liberated territories, also familiarized himself with the current power supplies situation in Karabakh.

Asked about the relevant situation on the liberated territories, AzerEnergy President Baba Rzaev briefed President Aliyev about the work carried out so far in Shusha, Shukurbayli, Fuzuli, Sugovushan and Kalbajar.

Speaking about the situation in Kalbajar region, Babayev said that the substation is under construction there despite some difficulties to transport equipment to the region. He added that the 200-pole lines will be laid to the region from Dashkasan and Murov. Babayev noted that 100 of the poles had already been installed. Asked about the quality of power supplies to servicemen serving on liberated territories, the AzerEnergy president stressed that power is supplied to everywhere. President Aliyev confirmed that “there are no problems in Shusha either”. 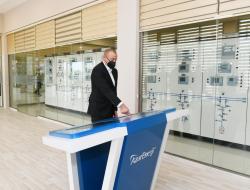