Mirza Fatali Akhundov's comedy has been presented at the State Russian Drama Theater.

The theater successfully staged "The story of Monsieur Jourdan, a botanist and the dervish Mastalishah, a famous sorcerer".

It is the second comedy in four acts by the Azerbaijani writer and playwright Mirza Fatali Akhundov. The production was written in 1850.

The play tells about medieval feudal ideology and superstitions.

Monsieur Jourdans prototype was the French natural scientist Claude Thomas Alexis Jordan (1814-1897), who has come for real to the Transcaucasia for the purpose of scientific studies in those years and researched, in particular, the flora of Karabakh, where the action takes place in the comedy.

The action takes place in Karabakh in 1848. The French botanist, member of the Royal Academy, Jourdan comes here to study the local plant species. He is visiting the ruler of the Tekle-Muganly nomad camp, Hatamkhan-agi. His nephew, the young Shahbaz, is attracted by Jourdans stories about Paris and is going to go there together with Jourdan to study sciences. However his fiancee, Sharafnis, and the aunt, Shahrabanu-khanum, do not want this. To hinder the trip, they resort to the help of the famous dervish Mastali, who came from Iran.

The play staged by the theater for the 100th time aroused great public interest. The actors play with great enthusiasm, as they did for the first time.

The production was directed by the theater's chief director, People's Artist Alexander Sharovsky. 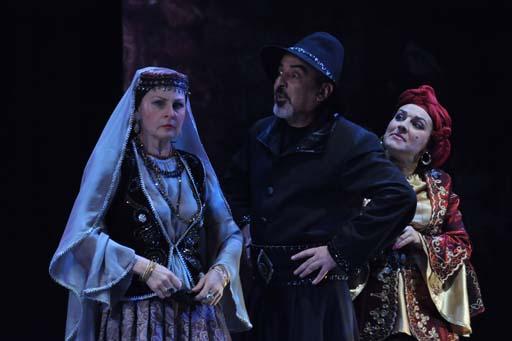