In his video, the dancer performs in a military uniform with the Azerbaijani flag in his hands. As the dancer himself says, he decided to release this video after the latest events on the Azerbaijani-Armenian state border.

"I am a very emotional person and everything that happens cannot leave me indifferent. Despite the fact that we - Azerbaijani art figures have been on a forced vacation since March, the country needs our support. In 2017, I was invited to represent Azerbaijan with a patriotic number at the World Festival of Youth and Students in Sochi. I performed in front of 25,000 spectators and festival guests from all over the world. Especially for this event, I staged the number "My Azerbaijan" to the music of Muslim Magomayev. After this dance, the festival organizers noted that it was one of the strongest dance performances in the entire history of the festival. I was the only artist who represented Azerbaijan at this festival. Excitement and responsibility did not leave me during the festival. And now, at such a  difficult time for all of us, I decided to recreate this dance performance and release a music video to honor the memory of martyrs, national heroes and support our people," Kazakov told Azernews.

"Since the early age, I have been representing Azerbaijan on the international arena. I have done my best to raise our flag, among many others at  international competitions and events. I am very proud that for many years I have represented Azerbaijan all over the world. First of all, I am an Azerbaijani artist and I am proud that I studied with the famous Azerbaijani teachers. Rest in peace, our martyrs and national heroes! May God give good health and strength to all our Azerbaijani people!," he added.

Farid Kazakov also expressed his gratitude to the director of the video director Samira Khalafova.

"New International competitions await me! I will continue to represent Azerbaijan at the highest level", the dancer concluded.

Notably, Farid Kazakov is a multiple winner of prestigious prizes. 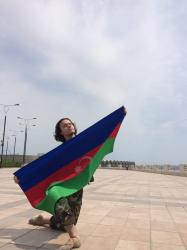