Vidadi Narimanbayov is regarded by many as one of the most distinctive art figures of the 20th century.

And, as is often the case with genius artist, his personal history is just as interesting as his art.

"In 1918, my grandfather, among those students, who were sent to the city of Toulouse to study engineering, while my grandmother studied there as a fashion designer. They finally met and it was love at first sight! They got married in 1926 in France in the city of Caen in Normandy, where the young people continued their studies. And then they had their first child - my father Vidadi Narimanbayov. After graduation, the newlyweds moved to live in Paris, where they worked and lived in the art district of Montparnasse. In 1930, my grandfather decided to return with his spouse, a French woman and the small son to his native Azerbaijan. In Baku, they had their second son, my uncle Togrul Narimanbayov...", the artist's daughter, Nigar Narimanbayova told Azernews.

However, the Bolsheviks came to power and the Stalinist repressions began to gain momentum. In 1937, the wheel of repression gained momentum and Vidadi Narimanbayov's parents were arrested and exiled. Thus, he and his younger brother were left alone with their nanny, who remained devoted to the family until the end of her life.

Since early age, Vidadi Narimanbayov decided to dedicate all his life to art.

In 1943, he entered Painting School named after Azim Azimzade. The years of his formation as an artist coincided with the beginning of the Great Patriotic War. In 1944, he was drafted into the army, where he served for six years.

He continued his education at Tbilisi State Academy of Arts (1957-1960). His diploma work was the painting "Hard Years" inspired by the military theme. During his student years, the artist became famous his art work the "Joy of the enemy ...".

The main heroes of Narimanbayov's works are soldiers, heroically fighting for their homeland, women who accompanied their husbands and sons to the frontline and children who experienced all the hardships of war.

He made many sketches dedicated to the military theme while serving on the frontline.

In 2009, the 90th anniversary exhibition of incredibly talented artist was held in National Art Museum.

The exhibition featured landscapes and portraits painted by the prominent artist over the last years of his life.

For many years, these canvases did not leave the walls of the painter’s workshop.

The theme of patriotism runs through all his paintings.

His stunning painting "Under the banner of the Motherland" was also presented for the first time in Baku.

The art work was dedicated to Azerbaijani soldiers who lost their lives during the Nagorno-Karabakh War.

The painting was finished just a few days before the death of the truly inspiring representative of national art.

This year marks the 94th anniversary of Vidadi Narimanbayov. After so many years, his stunning paintings continues to mesmerize people around the world... 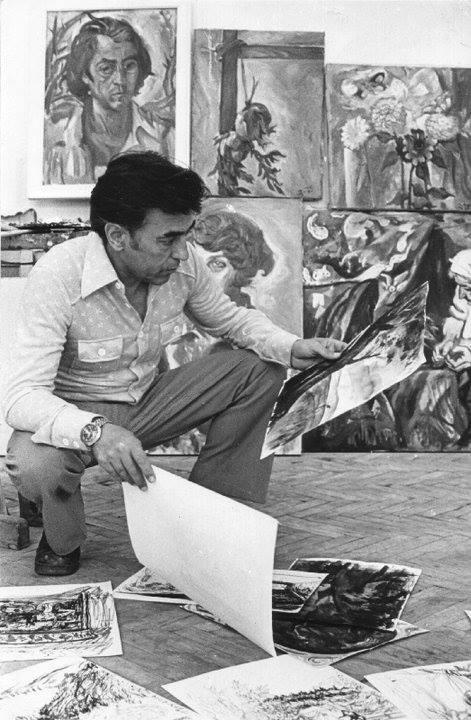