Tofig Hasansoy and Bakuba Jazz Band have captivated the listeners with powerful and expressive performance at the 16th Alanya Jazz Festival in Turkey.

Speaking about the festival, the project manager Nigar Babazade stressed that national musician performed with tremendous success, after each composition the audience burst with applause, Trend Life reported.

The songs of Azerbaijani, Turkish and American composers sounded in a new way. The music compositions featured Afro-Cuban and Latin American jazz and mugham.

Before each song, Tofig Hasansoy told the audience about the history of Azerbaijani jazz and its prominent representatives such as Vagif Mustafazade, Tofig Guliyev and others.

The festival was held under the motto "Music brings joy to the heart!", bringing together music bands from Azerbaijan, Turkey, France, Montenegro and Russia.

Memorial gifts were presented to the musicians from Alanya City Hall. 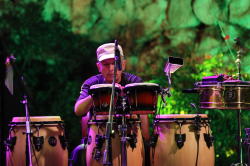