Azerbaijani athlete Murad Agarzayev sets the highest goals for the upcoming FIG World Championship in gymnastics to be held in Baku in March.

Agarzayev said in his interview with Trend that he wants to win a gold medal in floor exercises.

The athlete added that last year during the Baku World Cup, he advanced to the finals, but, could not rank first.

Agarzayev noted he will have even stronger rivals than in 2017.

Olympic champions, champions and winners of the world and Europe will participate in the competitions, he said, adding that it will be very difficult, but these difficulties must be overcome.

The FIG Artistic Gymnastics World Cup will be held in Baku on March 15-18, with 163 athletes from 27 countries taking part in the event. 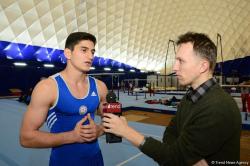 Results of FIG courses for trampoline coaches in Baku announced