New building of the secondary school No 1 has been commissioned in Goranboy region.

The previous building of the school was constructed back in 1937 and had 40 classrooms. However, the school building eventually became unusable.

So, a new building for 700 schoolchildren was built at the initiative of the Heydar Aliyev Foundation within the "New School for a Renewing Azerbaijan" project.

The new three-storey school building is provided with the necessary furniture and equipment. Classrooms and laboratories are equipped with visual aids.

Mukhtaram Mammadova, who has been working at the school since 1977, said that the previous building was unsuitable for teaching, which had a negative impact on students' education.

Speaking about the new school building, Mammadova stressed that it has been reconstructed and put into operation to modern standards. She expressed his gratitude to President Ilham Aliyev and First Vice-President Mehriban Aliyeva.

Landscaping and landscaping work has been carried out in the yard as well. 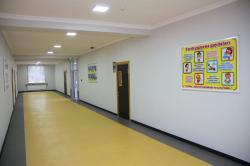 Resident of Azerbaijan’s Goranboy, who got blown up by mine is alive - prosecutor's office