At the meeting held on June 17, Tahirov expressed his satisfaction with the Azerbaijani military pilots' education at the Pakistani Air Force Academy. He stressed that the development of cooperation in the military aviation sphere and ties between the Air Forces contribute to further strengthening the Azerbaijani and Pakistani armies' combat capability.

At the meeting, the sides hailed the development of Azerbaijani-Pakistani relations and the level of strategic partnership. They also focused on prospects of cooperation between the Azerbaijani and Pakistani Air Forces in the military, military-educational and military-technical spheres. 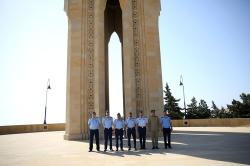