Azerbaijan continues the policy of supporting people with disabilities. Projects are being implemented to ensure unhindered use of social infrastructure by them.

In order to improve the social condition of war veterans and the families of the victims, the government allocates funds to provide cars, apartments and other facilities for them.

Ministry of Labor and Social Protection of Population has handed the keys of 50 cars to the disabled veterans of the Nagorno-Karabakh War and the disabled of the 20 January tragedy.

At the ceremony of awarding cars, Deputy Minister Vusal Nasirli recalled that the monthly pension for the families of martyrs was increased from 242 to 300 manats (from $142 to $176), and the social benefits and pensions for disabled war veterans grew by 100 percent.

Also, for the persons caring for the disabled people of group I, a monthly presidential pension of 50 manats ($29) was established.

Nasirli stressed that 80 percent of the program for issuing lump sum payments to family heirs in the amount of 11,000 manats ($6,471) has already been completed.

He also recalled that the keys of 626 apartments were given to the families of martyrs and disabled veterans of the Nagorno-Karabakh War, which is three times more than it was originally envisaged in 2018. This year it is planned to provide 800 apartments for citizens of these categories.

The deputy minister added that the funds allocated in accordance with the decree of President Ilham Aliyev dated March 18, 2019, allowed an additional purchase of more than 400 cars.

Nasirli also noted that rehabilitation opportunities for war veterans have been increasing year by year. He mentioned that the ministry is working on rehabilitation conditions in accordance with the most up-to-date requirements in a number of rehabilitation facilities both in Baku and in the regions.

He said that the construction of new rehabilitation facilities will start in 2019.

Thus, social protection of the population in Azerbaijan is ensured, and such issues are always kept in focus. A citizen of Azerbaijan stands in the center of the state policy. 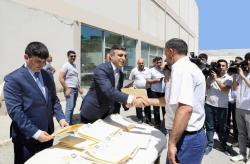