Azerbaijani film studio ahead of centenary showcases own products [PHOTO]

The history of the film industry in Azerbaijan spans over 100 years, Azernews reports.

Over this time, the local film companies have produced hundreds of films that received global recognition.

As for now, the number of films produced in the country is growing at an unprecedented speed enabling countless filmmakers to express themselves in so many ways.

In 2022, Azerbaijan's film industry celebrates 124 years since its establishment.

By the order of Azerbaijan's national leader Heydar Aliyev in 2000, August 2 was declared as a day for the Azerbaijani cinema.

The date was chosen to commemorate the first public film screening in Azerbaijan that took place in 1898.

On its 124th anniversary, National Cinema Day is marked with a number of large-scale events organized by AzerbaijanFilm Studio, known as one of the country's leading film companies.

The Culture Ministry and AzerbaijanFilm Studio continue to expand their capabilities, focusing on the needs of domestic filmmakers.

At a press conference timed to the script competition the "AzerbaijanFilm-100", the First Deputy Minister of Culture Elnur Aliyev spoke about the exceptional effects of cinema on society.

He pointed out that the Culture Ministry intends to mobilize its resources and work for the growth of the cinema industry in Azerbaijan.

"First of all, our goal is to attract investors to this field. Only in this case, the field of cinema can take the path of development. Development of the film industry and strengthening its role in Azerbaijani culture are among the Culture Ministry's main priorities. In the new page of our history, our main topic is our victory in the military field," he said.

"Our greatest achievement in terms of strengthening the institutional base is the relevant decree signed by President Ilham Aliyev on the establishment of the Azerbaijani Film Agency. We have great hopes for our Film Agency," he said.

The deputy culture minister emphasized that the Culture Ministry aims at attracting both film experts and investors as well as work on strengthening personnel management through training.

AzerbaijanFilm Studio has launched a new logo and website.

Speaking at the presentation, press secretary of the AzerbaijanFilm Studio Ramil Alakbarov said that the new logo expresses the identity of the company and represents the golden ratio, a term used to describe how elements within an art piece can be placed in the most aesthetically pleasing way.

"In addition to the film studio's history, structure, and services, the website includes a wide film library, where it is possible to get information about the films and watch them. The English version of the site is being worked on," said Ramil Alakbarov.

"In 2023, AzerbaijanFilm Studio turns 100 years. Therefore, it is planned to hold various events throughout the year as part of the celebration," he concluded.

The AzerbaijanFilm Studio has announced its budget spent on some projects.

Next, the winners of the script contest "AzerbaijanFilm-100", Mirsadig Agazada, Turkan Huseyn, and Nijat Dadashov were awarded special diplomas and cash prizes.

The Culture Mimicry also awarded a group of cinematographers in honor of National Cinema Day.

In total, 21 cinematographers were presented with honorary degrees and awards. 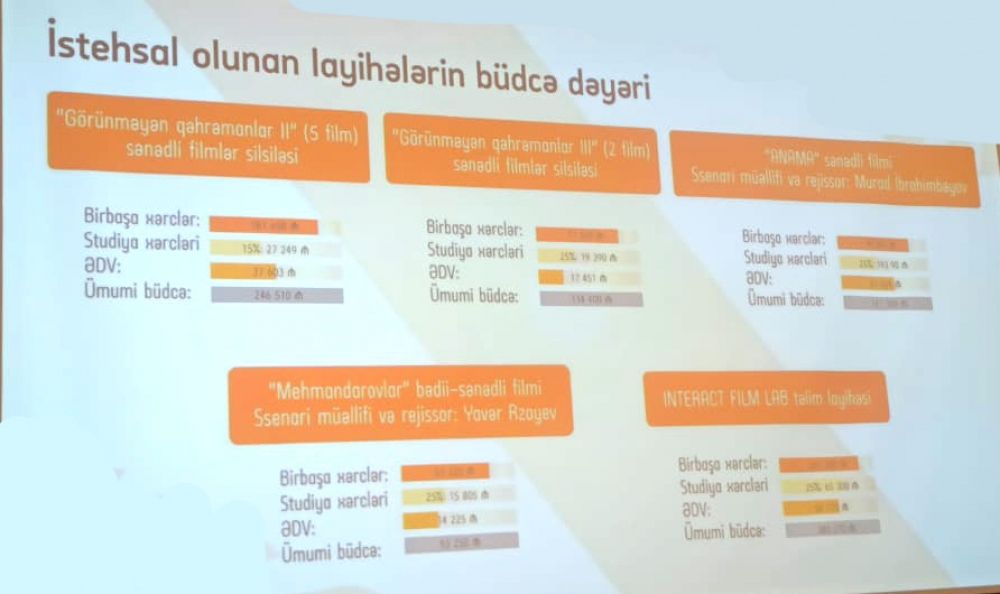