The music album "Planet" was recorded in collaboration with Warner Music Group. It was released on International Jazz Day, which is celebrated on April 30.

As the musician says, the music album fully reflects his feelings and world view.

The musician pays special attention to the major events that have affected humanity over the past years. Through his music, Isfar Sarabski engages in dialogue with listeners.

German's Norddeutscher Rundfunk (NDR) has recorded Isfar Sarabski's concert in Munich and will broadcast it on national radio throughout Germany and Europe. In France, the musician was invited to the TSF radio channel, where he gave an interview and played several songs live for radio listeners. 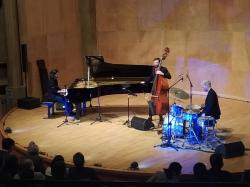