Baku Street Photo Festival (BSPF) is pleased to announce an exhibition of works by Honored Cultural Worker Farid Khairulin (1947-2020), known as one of the best contemporary photographer.

The exhibition will take place at the Shirvanshahs' Palace from August 30 to September 5, showcasing over 40 works from the photographer's personal archive.

Over his creative activity Farid Khairulin was always in the midst of stormy events, made photo reports on numerous foreign trips, covering important international events in many countries. He visited such hot spots as Shusha, Khankendi, Aghdam, Khojaly.

The photographer captured the Black January tragedy. Khairulin collaborated with many media outlets, including TASS and Reuters.

Farid Khairulin was a member of the Union of Journalists and the Union of Artists, the Azerbaijani Photographers Association. He is a laureate of the Hasan bey Zardabi Prize, Humay and Golden Argus prizes and many other awards.

Over his life, Khairulin took part in numerous republican and foreign photo exhibitions.

His ecological series "Paying for Oil" was the first piece of photographic art that got into a museum under the Department of Ecology of the British Foreign Office - before that, only paintings were exhibited there.

An  evening in memory of the photographer will be held at the Shirvanshahs' Palace on August 30.

The event will be attended by famous photographers,  friends and family members of Farid Khairulin.

The event is by invitation only.

The event will also be available via Zoom and the festival's YouTube page. 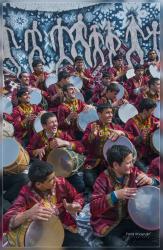