Famous tar musician, Honored Artist Sahib Pashazade has been awarded in French city Carrières-sous-Poissy for high performing skills during a concert program dedicated to the International Day of Peace.

"I have performed six works of Azerbaijani and French classics. When I was performing mugham, two people in the hall stood up and began to applaud. As it turned out, they were the mayor of Carrières-sous-Poissy and the world famous Tajik sculptor, UNESCO World Artist Amri Aminov. After the concert they came up to me and said that they could not resist and decided to stand up to greet my mugham performance. So, I was very proud and pleased," the musician told Trend Life.

Almost two years have since that performance. After two years, the city mayor awarded Sahib Pashazade with the medal.

"Moreover, the mayor added that such performance must be highly appreciated and rewarded. Almost two years have passed since that performance, followed by pandemic. A few days ago I was very surprised hearing this news," he added.

Now Sahib Pashazade is the only Azerbaijani musician who received this medal.

In 2011, Sahib Pashazade was awarded with the title of Honored Artist of Azerbaijan. 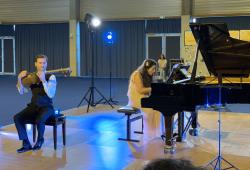